The iron ring is a symbol of professional duty and obligation worn by Canadian engineers. The ceremony in which one receives the ring is commonly referred to as the “Iron Ring”; however, the official name is The Ritual of the Calling of an Engineer.

During the Ritual, graduating engineers and others deemed to hold academic qualifications equivalent to graduates of a program accredited by the Canadian Engineering Accreditation Board undertake an obligation. It is not an oath but a solemn expression of intent to adhere to the highest ideals of the engineering profession. As part of the ritual the newly obligated engineer is presented with a ring made of iron (now stainless steel). It is worn on the little finger of the working hand and is a reminder to the recipient and the public that the person has taken the obligation.

There is a common misconception that the first rings were made from steel salvaged from the wreckage of a failed 1907 Quebec bridge. Were it true, it would provide a positive symbolism in support of the Ritual; however, it is a myth!

The Ritual was conceived of and initiated by some past-presidents of the Engineering Institute of Canada in 1922, with the assistance of the author and poet Rudyard Kipling. Kipling provided the wording of the obligation and the administrative rules—as such it is sometimes referred to as the Kipling Ritual.

It was instituted for the simple purpose of directing the newly qualified engineer toward a consciousness of the profession and its social significance and reminding the more experienced engineers of their responsibility in welcoming, mentoring and supporting the newer engineers as they enter the profession.

The wording of the Oath of Obligation undertaken in the Ritual reads,

An often included section of the Ritual ceremony is the reading of the Kipling poem The Sons of Martha. It reminds the new engineer to bear in mind the importance of considering the human qualities of the heart and spirit—and not entirely material things.

During the ceremony, the iron ring is placed on the little finger of the working hand of the newer engineer by an older obligated engineer at the ceremony with the words;

When feasible, the older engineer can be a parent, grandparent, relative, or friend. One instance in Camp 8 occurred when the Premier of Manitoba, Gary Filmon, P. Eng., “ringed” his granddaughter.

Cairns across the Country 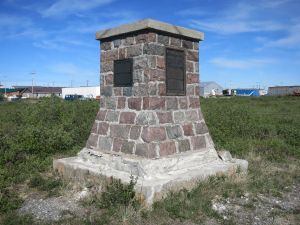 In the 1920s Harry Falconer Mclean, a prominent Canadian general contractor, who undertook a number of significant construction projects across Canada, became aware of the Kipling poem. On his own initiative, he erected cairns on the sites of many of those projects, bearing the entire text of the poem on three brass tablets. The cairns were dedicated “In loving memory of those who worked and died here, the sons of Martha”. One such cairn stands at the terminus of the Hudson Bay Railway in Churchill, Manitoba.

The Corporation of the Seven Wardens Inc. is the custodian and administrator of the Ritual across Canada. As the name suggests there are seven Wardens in charge of the Corporation. The “Seven” is significant because the original proponents were seven past-presidents of the Engineering Institute of Canada. The Wardens are supported by Alternate Wardens.

The ceremony and Ritual are administered by various Camps of the Corporation. In Manitoba, Camp 8 is the responsible group (https://www.camp8ironring.ca/). Each Camp is administered by seven Wardens assisted by Alternate Wardens in a fashion similar to the Corporation of Seven Wardens. The term “'camp'”, in this case, means “adherents to a particular doctrine regarded collectively”.

The inaugural Ritual ceremony was held in 1925 in Montreal. Over time, many Camps have been established across the country. There are now 28 Camps across the country closely associated with the number of engineering faculties.

The Ritual is uniquely Canadian and has been copyrighted in Canada and in the United States. One other intriguing aspect of the Iron Ring is that newly obligated engineers are encouraged to arrange to have their rings returned to their Camp after their passing. Not much has changed over time as the ceremony has maintained its traditional roots except the development of standard operational guidelines and a contemporary image.

In Manitoba, it is often assumed that the Ritual is one contiguous federation of the Faculty of Engineering at the University of Manitoba, Engineers Geoscientists Manitoba, and Camp 8. While those entities cooperate closely on the implementation of the Ritual and in recognizing the new graduates, and while they typically share personnel in common, they are separate entities. For example, when Camp 8 was established in 1930, the Council of the Association of Professional Engineers of Manitoba (APEM) was, at the time, very supportive. For instance, it arranged with Camp 8 to sponsor an annual luncheon for the graduating class in conjunction with the Ritual. In that context, a note in the 25th-year history of APEM reads: “The Association has been able to have the exemplification of the ‘Ritual’ as one of its chief annual functions.”

Canada Post recognized the Iron Ring by issuing a special stamp in 2000—its 75th year. It was a unique pane design using what is known as a tête-bêche or head-to-foot layout in which two half-rings become a full circle across two stamps. 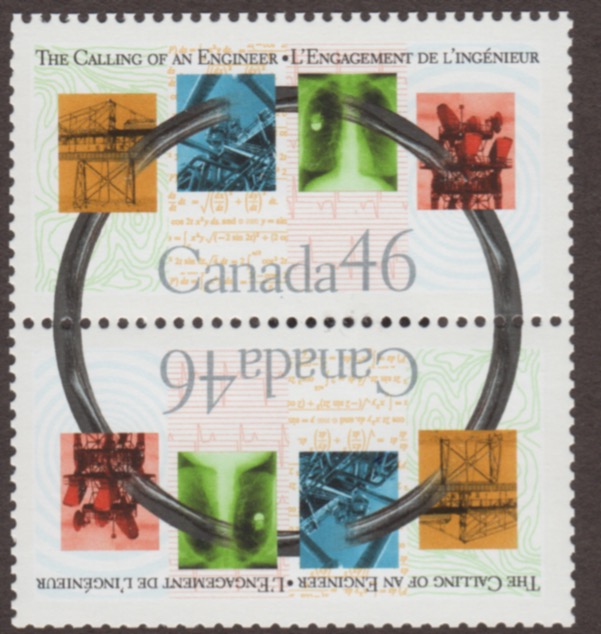 The design acknowledges the significance of the ring ceremony and recognizes the ring as linking the four major engineering achievements depicted on the stamp.

Check out the news release from year 2000 in the Keystone Professional. https://heritage.enggeomb.ca/images/f/f0/00aug.pdf

Through the 28 Camps across Canada, by the spring of 2020 some 500,000 engineers have been presented with an iron ring. For more information see https://ironring.ca/home-en/

There have been many ceremonies over the years. The last number of years Camp 8 has held ceremonies in the fall, generally the third week of November and in the spring, usually the third week of March. However all that changed when Covid 19 arrived just as the March 2020 ceremony was to take place. Camp 8 adapted to online ceremonies since then so that candidates could get their rings as they began their careers. Camp 8 members continue to adapt as circumstances change and in-person ceremonies will once again be a reality.