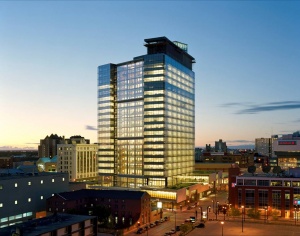 Manitoba Hydro Place (MHP) is the head office of Manitoba Hydro, the electric power and natural gas utility in Manitoba, Canada. Located in Winnipeg and officially opened in September 2009, it was the first LEED Platinum office tower in Canada and among the most efficient office towers in North America. By using an integrated design process, building energy use was minimized for Manitoba’s climate. Consuming 88 kWh/m2, Manitoba Hydro Place uses 60% less energy than the Model National Energy Code for Buildings and 73% less energy than the standard office tower in Winnipeg. MHP houses two thousand employees on 21 floors. Unique attributes of this building include North America’s largest solar chimney providing 100% fresh air at all times, Manitoba’s largest geothermal heating and cooling system, and the world’s first “reversed” double façade optimized for a cold climate.

At the outset of the design process for Manitoba Hydro Place, the integrated design team established a project charter with six main goals:

It is important to note that MHP was not designed and built with the primary goal of energy efficiency, even though this has been much talked about. First and foremost, the goal of the project was to provide a high quality of interior space for the staff of Manitoba Hydro. It was important to the design team to prove that a high quality space can be energy efficient and sustainable.

Manitoba Hydro place uses many unique systems to improve efficiency and workplace environment. These systems were designed during the integrated design process to maximize efficiency. Some of these systems include: 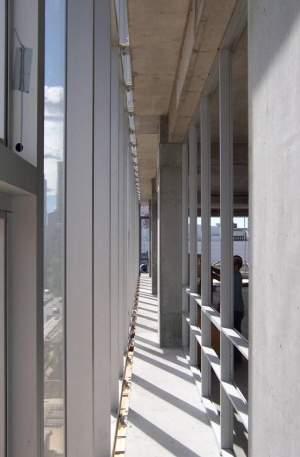 The double façade, with its high glazing ratio and ultra clear low-iron glass, supports good daylighting and access to views for the staff. The 3.3m clear height office loft, in combination with a narrow floorplate means that the entire office loft has good daylighting. Solar and glare control shades are also located within the double façade. This significantly improves the solar control performance, and reduces maintenance requirements by minimizing exposure to occupants and the exterior. The double façade also enhances flexibility of the loft space, as structural columns have been moved into the interstitial space. This leaves a totally open office loft for future flexibility.

Solar Chimney and 100% Fresh Air at All Times 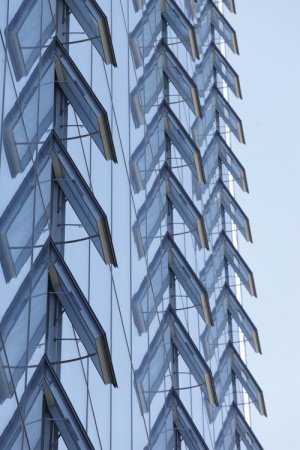 Manitoba Hydro Place draws in air from the southern face of our building into the south wintergardens. During the summer and shoulder seasons automated vents in the wintergarden bring fresh air in passively. During the winter, air drawn in mechanically and preconditioned. The wintergardens function as “lungs of the building”, with passive solar heating of the supply air. It is then distributed through the raised floor distribution system. The solar chimney, located at the northern end of the building, uses a natural stack effect to create a pressure difference in the building, pulling all air towards itself. During the summer and shoulder seasons the chimney will be opened and air will be exhausted naturally. During the winter the chimney will be closed and the exhaust air will be drawn into the parkade for heating purposes. The exhaust air will also be used as heating for conditioning the air drawn in by the fan coils. 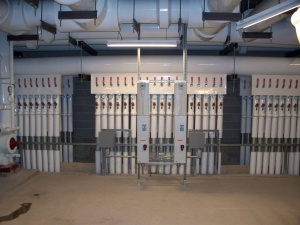 The foundation of the building’s heating and cooling system is the geothermal system, a closed loop system consisting of 280 boreholes, six inches in diameter, 400 feet deep, interspersed between the building's foundation piles and caissons. Each borehole contains tubing filled with gylcol encased in thermally enhanced grout. In summer the glycol extracts heat from the building and returns it to the ground. The same type of heat drawn from the earth is used to warm the radiant slabs during colder temperatures. The geothermal conditioned glycol passes through a complex series of heat pumps and exchangers to maximize efficiency. Conditioned water is circulated in tubes in the exposed ceiling slabs, providing 100% of the temperature conditioning. In the winter the process is reversed. Through this radiant heating system, the geothermal installation provides approximately 60% of the heating with high energy efficient condensing boilers providing the balance during the coldest months. 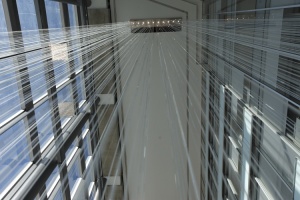 To regulate humidity each of the 3 south atria which stand 6 storeys high, hold water features. Each water feature measures 24m high and consists of 280 mylar ribbons which are 4mm wide. The ribbons run floor to ceiling and the total surface area is approximately 53 m2. In the summer, cool water is ran through the closed system to lower the humidity and the opposite happens in the winter, warm water is used to humidify the air. The atrium also contains a large water feature, regulating its humidity.

• Over 35,000 cubic metres of concrete are used in the building. That would fill more than 6,400 standard cement trucks

• As foundation work began in 2006, discovery of a rising water table forced the elimination of one -underground level. Many of the systems originally planned for the basement had to be relocated to the building's mechanical penthouse. The building's foundation also had to be substantially redesigned. The integrated design process made it much easier to make these necessary, unforeseen changes.

• Over 13 000 people have toured Manitoba Hydro Place, including people from Saudi Arabia, Germany and China.

• Manitoba Hydro Place is 115 metres tall, including the solar chimney.

• 2009 Council on Tall Buildings and Urban Habitat (CTBUH)'s Best Tall Building Americas award. At the time, CTBUH said Manitoba Hydro Place "was designed to be completely site specific. The design could not be transplanted to another city and still work, thus making it the perfect response to the seeming homogenization of the world's skylines."

• 2009 Building of the Year, Office Category by Arch Daily