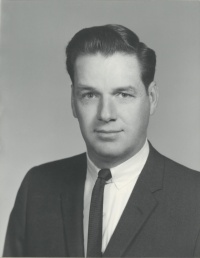 Craig Sommerville was born on March 6, 1925 in Winnipeg. Following high school education at Daniel McIntyre Collegiate and service in the Royal Canadian Navy, Mr. Sommerville obtained his B. Sc. (Civil) from the University of Manitoba in 1949. Early in his professional career, Craig selected the field of water supply and distribution as his field of specialty, and to this end he undertook post - graduate studies in Public Health Engineering at the University of Toronto, receiving a Master’s degree in 1954.

Craig began his professional career in Hornepayne and Toronto, Ontario where he was employed by the C.N.R. He and Joan moved to Winnipeg in 1952. Except for the time on leave to obtain his Master’s degree, he was employed by the Greater Winnipeg Water District and its successors, the Metropolitan Corporation and the amalgamated City of Winnipeg. He worked in various capacities beginning as Design Engineer. After the formation of the Metropolitan Corporation of Greater Winnipeg he became Engineer of Waterworks and then Deputy Director and Chief Engineer of the Water and Waste Division. He was instrumental in the major improvements of the water supply and distribution facilities in the Winnipeg area and the leader in developing plans for the future in these fields.

Craig Sommerville and Joan moved to Victoria, BC. in 1981 where Craig worked for the Capital Regional District, retiring as Chief Engineer in 1986.

Craig was very involved in the affairs of the Association (Association of Professional Engineers as it was known at the time) commencing in 1957 with the Public Relations Committee. He became Chairman the next year and held that position for several years. In 1959 Craig became Associated Editor of the Bulletin Committee for which he wrote several articles, for example on fees as he was also member of the Committee on Fees.

In line with his rapid ascension to the head of committees, Craig became Editor of the Bulletin Committee in 1960. This year he wrote an article ‘Meeting Rejects Building Plans’. He relinquished the chair in 1960 but remained on the committee and became a member of the Student Relations Committee.

Craig was elected to Council in 1964 and ended his committee work. He was re-elected in 1966 when he was elected Vice President. Slated to become President the following year, his ascension was almost derailed when in July 1966 he took a Nuffield Travelling Fellowship to study water treatment systems in England for six months. While Frank Fowler was appointed Vice President, Craig participated in the Nominating Committee and represented the Association at the APEA annual meeting.

In spite of his absence Craig was elected President for 1967. He presided over the move to the Chamber of Commerce Building. Other notable endeavours noted in his annual report were: Policy on Collective Bargaining; Qualifications on Registration; and the formation of a new committee, Safety in Engineering Practice.

During his working career, Craig was active in many engineering and environmental associations, such as the Western Canada Water and Wastewater Conference (Director), the American Water Works Association (Regional Director) and the Federation of Associations on the Canadian Environment.

He was an active member of Toastmasters and was also involved in community club work.

He received the Queen’s Silver Jubilee Medal in 1977.

In 1978, Craig was a Warden of Camp 8 for the Ritual of the Calling of an Engineer.

Craig met his wife Joan in Montreal in 1944 while he was in the navy and they married in September 1949 after his graduation from the University of Manitoba. They had four daughters. Craig and Joan were active in curling, cross-country skiing, camping, fishing and traveling. They and their girls tented all over Canada, the US, and Western Europe, and after retirement Craig and Joan travelled by motorhome across Canada and into Mexico. Joan was very active in the Engineers Wives Association and was a member of the executive.