Formally identified in 1751 by Swedish scientist A.F. Cronstedt, nickel is one of the most important metals in modern society. Its greatest use is as an alloy with other metals to improve their strength, hardness, and corrosion resistance. When nickel is alloyed with iron and chromium, it produces its most important product, stainless steel. Canada entered the world nickel market with the discovery of the Sudbury ore body during the construction of the Trans-Canada rail line during 1883-1888. Production of nickel from Sudbury, Ontario peaked during the First World War and International Nickel (INCO) became the largest supplier of the metal in the world, at that time. The demand from peacetime users of nickel started growing in mid 1920s and led to the search for more nickel resources.
The initial nickel find first discovered in northern Manitoba was Mystery Lake South in the Ospwagan group of rocks around 1927.

However, it wasn’t until 1956 when an exceptionally rich ore body was discovered in the Moak Lake area by Dr. John F. Thompson of INCO. 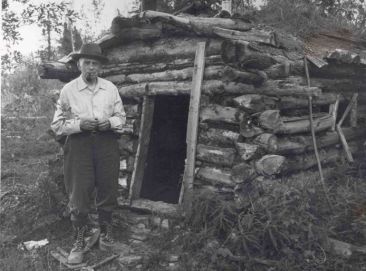 This discovery went on to become one of the largest and most important nickel deposits in Canada. Its discovery resulted in the development of the first integrated nickel-mining, smelting, concentrating, and refining complex in the western world and resulted in the creation of the City of Thompson. When opened it was the second largest nickel producing operation in the world, only after operations in Sudbury.

Following World War II, the development of airborne geophysical surveying resulted in its frequent use to measure magnetic and conducting properties of underground rocks which were not visible on the surface. Intensive nickel exploration began in northern Manitoba around the known mineralization of Mystery Lake and Lynn Lake around 1941. However, despite extensive prospecting by INCO for ten years (1945 to 1955) in the area, no significant rich ore body was discovered. By 1955 twenty drills were boring deep along the northeast - southwest trending belt, showing evidence of large, but not rich, nickel deposits. During this time the improved airborne geophysical surveys pointed to a highly favourable anomaly about 35 km southwest of Moak Lake. There were no surface indications of the presence of ore, which was hidden under a thick blanket of muskeg and swamp. Repeated airborne surveys on adjacent parallel lines confirmed the location of a promising anomaly indicative of the deeply buried ore body.

Almost overnight diamond drilling of this anomaly began bringing back cores of the rich ore. This culminated in a major nickel discovery on February 4, 1956. 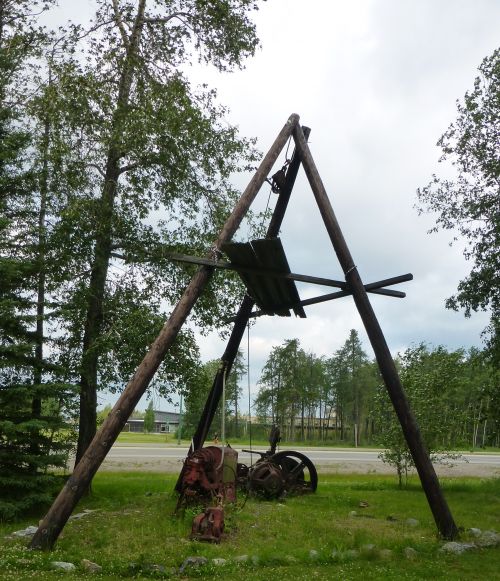 Over the following months the discovery was found to be so important that by December 5, 1956, Manitoba Premier Douglas Campbell and Henry S. Wingate, President of INCO presented a program of development, which would involve an initial expenditure of $175 million, which is equivalent to $1.7 billion in 2020 dollars.

This commitment led to the development of the ore body into a working mine with shafts called T1 and T3, an associated processing facility, and town infrastructure in as little as six years. In addition to this, an agreement was made between the relatively young Manitoba Hydro and INCO to develop the 160 MW Kelsey Hydroelectric Generating Station on the Nelson River in order to provide power to the remote development. Construction began on the generating station in 1957, one year after the first discovery, with the assistance of a low interest loan from INCO of $20 million.


Construction began on the mining development by the winter of 1957, with the T1 mine shaft and headframe completed in 1961. 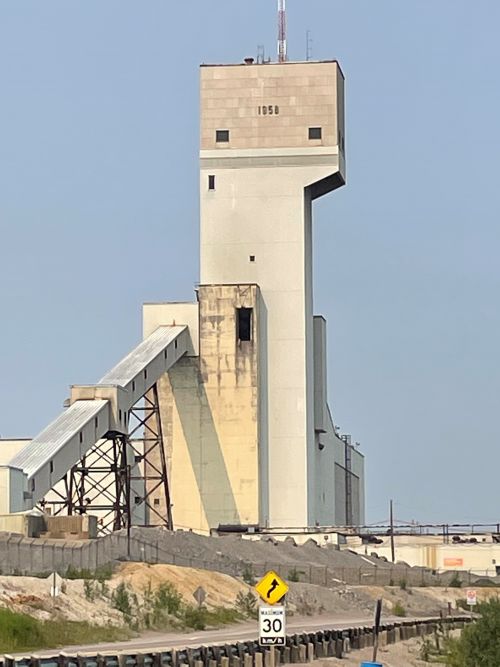 The majority of the work initially was done by engineers located at INCO’s Copper Cliff facility or by consultants located in Ontario. Gradually a significant number of University of Manitoba (U of M) graduates in geotechnical engineering were hired and subsequently promoted as mining engineers from within. Underground operations were accessed from the T1 and T3 headframes.

The Thompson south open pit was operated from 1986 to 1992 to mine the crown pillars of the deposit.

This open pit mining was led by local U of M graduates, John Fulton, P.Eng. and Ray Prochera, P.Eng.


A year after the agreement with the province, the town of Thompson was founded in 1957 and named after INCO's chairman, John F. Thompson. The new townsite was designed as a "planned community" in order to prevent its disorderly development common to many resource communities. Thompson was officially incorporated as a town in 1967 on Canada's Centennial Anniversary. Having reached a population of 20,000 in 1970, Thompson was then incorporated as a city during the celebration of the 100th Anniversary of Manitoba's entry into confederation.

In 2006 INCO was purchased by VALE, a large Brazilian mining company, and currently operates as a wholly owned subsidiary of the parent company.

A dedication to the efforts of all the miners in Thompson area is found at the edge of the city in the shadows of the mines.

The geological formation which contains the Thompson deposit is long and narrow, and is presently known to stretch from Resting Lake near Wabowden in the south to Moak Lake north of Thompson. This formation is referred to as the Thompson Nickel Belt (TNB) and is effectively the boundary between two major formations; the Trans-Hudson Orogen and the Superior Province. The exposed northern segment of the TNB has an orientation of N30°E, is 30–40 km wide, and is approximately 200 km long at the surface as shown in the two illustrations below.

Exploration in much of the TNB has been focused on the Paleoproterozoic Ospwagan group which arguably contains all of the nickel deposit-hosting intrusions in the belt. Two extensive horizons in the region are within the Ospwagan group and are known to contain an abundance of sedimentary sulphide, the primary ore containing nickel. It is these horizons which are believed to have been intruded by magma from within the earths crust, and produced many of the belt’s nickel deposits.


Towards the middle of the Ospwagan group is the Pipe Formation, a succession of deep-water deposits, which locally contains abundant iron sulphide (See below).

Magnesium-rich igneous rocks, called ultramafic rocks, intruded the Ospwagan Group about 1.88 billion years ago. The ultramafic rocks were derived from magmas that were generated deep in the Earth’s mantle. In addition to magnesium, these magmas were also enriched in metals such as nickel. When these metal-enriched magmas came into contact with the iron sulphide-rich sedimentary rocks of the Pipe Formation, they interacted. The ultramafic magmas dissolved some of the solid sulphide, which was later precipitated as sulphide-melt droplets. The sulphide-melt droplets scavenged metals such as nickel, copper, and cobalt from the surrounding ultramafic magma. In places these sulphide-melt droplets were able to accumulate and coalesce where they formed the high-grade nickel ores being mined today in the Thompson nickel belt. The nickel ores consist largely of the iron-sulphide mineral pyrrhotite (FeS), but within the pyrrhotite are concentrations of the nickel sulphide pentlandite (Fe, Ni9S8) and locally the copper mineral chalcopyrite (CuFeS2). Other minerals such as pyrite (FeS2), cubanite (CuFe2S3), millerite (NiS), nickeline (NiAs), gersdorffite (NiAsS), and rare platinum-group element-bearing minerals can also be present.
About 1.80 billion years ago, after the intrusion of the ultramafic magmas, the formations of nickel-bearing sulphides in the Thompson area was subjected to a major mountain-building event known as the Trans-Hudson orogeny. This event led to intense deformation of the rocks in the area, resulting in multiple generations of folds and faults. The deformation was accompanied by intense metamorphism, with rocks exposed to temperatures ranging from 550 to 800 °C and pressures from 350 to 650 megapascals (equivalent to being buried roughly 13–23 km). At these metamorphic conditions the sulphide ore would have behaved plastically, like toffee, and flowed into areas of lower strain. This led to complex deformation of the ores and their host rocks. The Thompson mine structure is shown below. It shows all the geological formations of Ospwagan group, including the ultramafic and metadiabase rocks. The associated cross section shows a depth cross-section of the complex folded structure along line Y-Y’. The nickel mineralisation follows the folded structure of ultramafic rocks within the Pipe formation. The break in the continuity of mineralisation is exemplified in these two illustrations due to the complexity of folding and displacements caused by associated movements along fault zones.

The rich ore at the Thompson mine is nearing the end of its mining life. However the potential for similar nickel deposits of the same age can occur all along the margin of the Superior province. Continued success in exploration near the mine is exemplified by a recent extension of the Thompson deposit, demonstrating the exceptional potential of the TNB.
As of 2018, there have been approximately 18 deposits discovered in this prolific belt including four past producing mines, three mines currently on care and maintenance, and one mine currently in production. The Thompson, Birchtree, and Pipe deposits have produced more than 150 million tonnes of nickel sulphide ore at a grade of 2.32% Ni, 0.16% Cu, 0.046% Co, and 0.83 g/t platinum-group elements (PGE). The total remaining reserves for the Thompson operation, as estimated by VALE in 2017, was 27.5 million tonnes at 1.75% nickel.
A summary of the ore produced from the 18 different deposits mined primarily for nickel in Manitoba is shown in the table below. The top thirteen of these mines are part of the TNB.

Mine engineering research - Manitoba engineers were involved from the late 80s into 90s in the development of computer controlled underground hauling systems, which was a first for INCO operations. The small mines research group in collaboration with the University of Newcastle and others in Canada and U.S also spear headed development of Rock Tunnel Boring machines. This work was led by Dave Phelan, P.Eng. from U of M. For INCO (VALE), engineering was not primary focus of the company, as such most of the work was farmed out to consultants, mostly based out of Manitoba (Golder Associates, Laurentian University etc.).

Nickel base pen holder presented to Dave Ennis, P. Eng. then Executive Director and Registrar for the Association on his retirement in 2005 to recognize his efforts in trying to understand the “Geoscience” profession and managing the process that include it in the “Engineering Act”. That inclusion resulted in the new revised name of "The Association of Professional Engineers and Geoscientists of Manitoba". The APEGM acronym lasted several years until a more recent change in September 2015 when the Association adopted “Engineers Geoscientists Manitoba” as its title.

A large amount of historical information has been derived from published literature on the Thompson nickel discovery and INCO/VALE corporate literature. The geology and mineralization information has been taken from web-based reports available from Manitoba Geological Survey and open file, “Field Trip Guidebook” from C.G. Coueslan. Technical reviews, feed back and partial re-write by Christian Bohm is highly appreciated. The Heritage Committee also provided input and review.


6. Thompson J. F. and Beasley N. 1960: For the Years to Come, a Story of International Nickel of Canada