Hydro-electricity is generated at Manitoba Hydro’s most northern generating stations as Alternating Current (AC) power, then converted to Direct Current (DC) for transmission south, then inverted at the southern terminus to AC power for end use. DC power transmission is more efficient than AC transmission over long distances. The converter stations are large complexes consisting of AC and DC switchyards, switch gear, converter transformers, valve groups, filters, and ancillary systems for cooling and operation.

The Bipole III Transmission Reliability Project was proposed in 2007 to improve system reliability by reducing dependency on the Dorsey Converter Station and the existing single HVdc Interlake corridor. Due to the heavy reliance on one transmission corridor (over 70% of northern generating capacity) and a single converter station in the south (Dorsey Converter Station), the system is vulnerable to extensive power outages from severe weather (major ice storms, extreme wind events, tornadoes), fires, or other events. Following extensive environmental assessment, public engagement, and regulatory processes, Manitoba Conservation and Water Stewardship (MCWS) granted an Environment Act Licence for the construction, operation, and maintenance of the Bipole III Transmission Project on August 14, 2013. For more in information regarding the Bipole III Transmission Project, environmental protection plans, and the licence granted by MCWS see the Project website at www.hydro.mb.ca/bipole3.

The Bipole III transmission line follows a 1,384 km (860 mile) route from northern Manitoba to southern Manitoba. It will originate at the Keewatinohk Converter Station located northeast of the Town of Gillam. The transmission line route will travel west and south towards community of The Pas, then south, staying west of Lake Winnipegosis and Lake Manitoba. It will then pass south of the City of Portage la Prairie and the City of Winnipeg to terminate at the Riel Converter Station east of the City of Winnipeg, in the Rural Municipality of Springfield (Map 1). 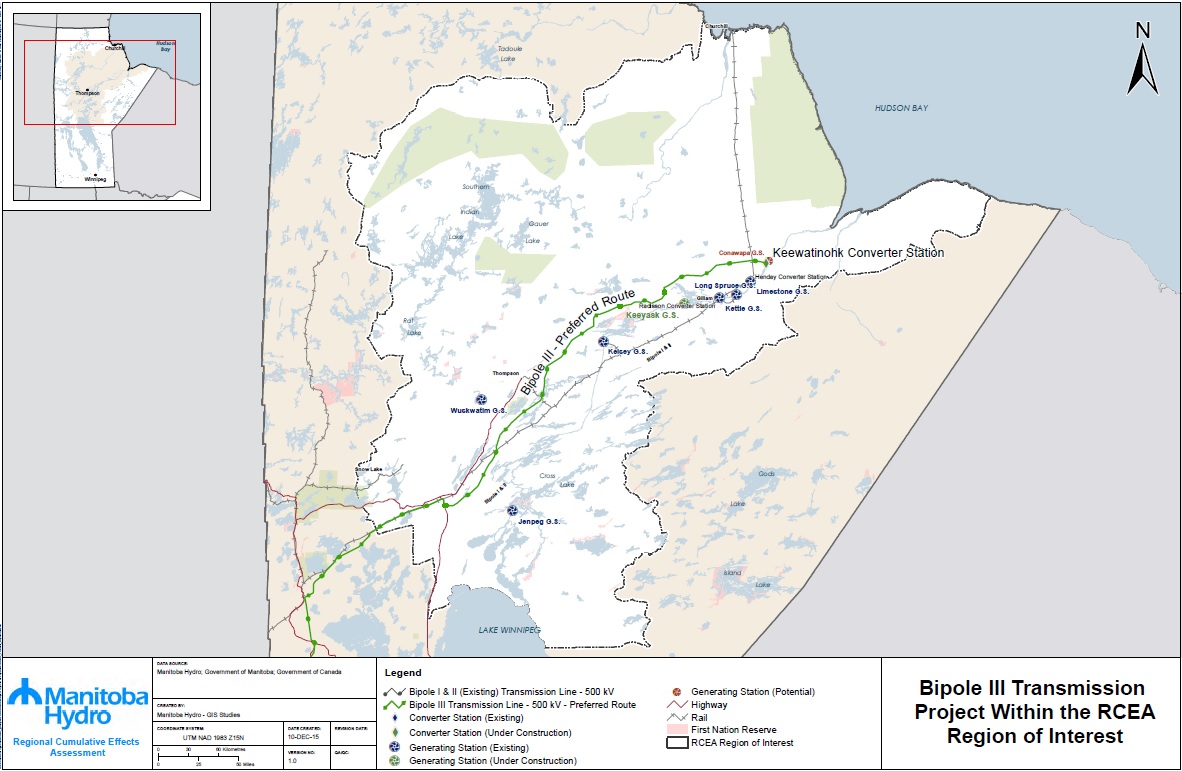 The project involves the construction of the following components:

The Riel Converter Station and associated infrastructure in southern Manitoba are not described here.

Clearing of trees on the proposed right-of-way will be undertaken as part of the construction activities. Right-of-way clearing will be subject to standard environmental protection measures that have been established in association with Manitoba Hydro transmission line construction practices, as well as the project-specific Environmental Protection Plan.

Transmission line construction involves several stages: installing tower foundations and anchors, assembling and erecting structures, and stringing of the conductor and overhead ground wires. The different stages entail the use of various types of vehicles and heavy equipment.

Clearing and construction workers on the HVdc transmission line are being housed in mobile construction camps, or where feasible and practical, in suitable accommodations available in local communities. Camp size can range from 10 to as many as 200 workers, but will vary according to the activity, contract size and labour force requirements.

A considerable amount of soil will be excavated from the construction site to prepare it for the principal works. Some of the materials excavated (e.g., soil and organic materials) will be stored and used in site rehabilitation. The remainder will be placed in an excavated material placement area.

Local construction materials will be required to support site development for the converter station, the ground electrode, the station access road, the construction camp and other supporting infrastructure. The required materials will include concrete aggregates, random fill, sub base material, insulation stone, road topping material, erosion control material, oil containment material, and pipe bedding. There are a number of nearby natural sources of impervious (e.g., clay) and granular (e.g., sand and gravel) materials. Offsite borrow sources will be required primarily for supply of granular materials. Materials such as concrete aggregates and granular fill will generally be obtained from borrow pits in close proximity to the construction sites.

Keewatinohk Access: The main access to the site is by the existing permanent gravel road to the potential Conawapa Generation Project (GP). The road was extended 24 km (14.9 miles) from the Limestone GS construction area to the potential Conawapa GP construction area in 1992. There is an existing 2.5 km (1.5 mile) rail spur from the Hudson Bay Railway line to the Henday Converter Station. Both of these items will be upgraded as part of the Keewatinohk Converter Station construction. The access road is private and is not part of the provincial road network.

Workforce: As the camp and infrastructure supporting construction were developed, the workforce commuted from the Town of Gillam area. Once portions of the camp were ready for occupancy, the construction workforce began living at the Keewatinohk camp (lodge) for several weeks at a time and travel to their homes during their days off.

Transmission Line Access: Various existing and newly developed temporary access trails will be used for construction of the line. Access management has been outlined in the Access Management Plan that was approved for the project.

Once completed and fully commissioned, the Keewatinohk Converter Station will be operated at all times and will have Manitoba Hydro personnel on-site performing regular operation, maintenance and inspection duties. Actual transmission of electricity will vary with demand and electrical load conditions. Qualified operators and maintenance personnel will routinely inspect and maintain the station and electrode sites and, in the case of contingencies, correct any problems or related environmental effects. Total operations and maintenance workforce has been estimated at 42 workers, exclusive of the periodic presence of contractor staff.

As part of the regulatory review process, an Environmental Protection Program was reviewed and approved for the construction and operation of the project. The Environmental Protection Program consists of access management, cultural and heritage protection, biophysical monitoring plans, and socio-economic monitoring plans. An Integrated Vegetation Management Plan will be used to ensure that re-growth in the cleared rights-of-way does not interfere with transmission line operations.

From a land use and environmental planning perspective, the HVdc transmission line is the most significant component of the Bipole III Project. The final preferred route (Map 1) has been selected on the basis of environmental, socio-economic and technical criteria and an extensive program of public and community consultation. To minimize the risk of common outage (e.g., outage involving both the existing Bipoles and Bipole III due to a single extreme weather event), the routing process has avoided the Interlake area, in order to provide substantial physical separation from the existing Bipole I and II transmission lines. For reasons of provincial policy, the routing process has also avoided the area east of Lake Winnipeg.

The sites chosen for the Keewatinohk Converter Station components and the associated construction camps were reviewed and discussed with representatives of Fox Lake Cree Nation in a series of meetings.