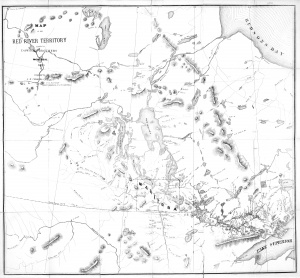 Dawson Trail was the first all-Canadian route that linked the Great Lakes and eastern Canada with the western Canadian prairies. Built in 1870 it was a water and land based route that began at Port Arthur (now Thunder Bay, Ontario) and ended at the Red River Colony (now Winnipeg, Manitoba). The total distance of the trail was approximately 853 kilometres. The land based portions of the trail are commonly referred to as Dawson Road.

In 1857, the Government of Canada commissioned an expedition comprised of geologist Henry Youle Hind and engineer Simon James Dawson to explore and survey a route from Lake Superior to the Red River Colony. The intent was to create an all Canadian travel route from the east without having to take the existing routes through the United States. Hind and Dawson further surveyed the route in 1858. Ten year later in 1868, after Canadian Confederation, Dawson was placed in charge of constructing the Canadian-financed route from Lake Superior to Lake of the Woods, with the section from there to the Red River Colony under the supervision of John Allan Snow. The entire trail was completed in 1871 and afterwards named after Dawson. 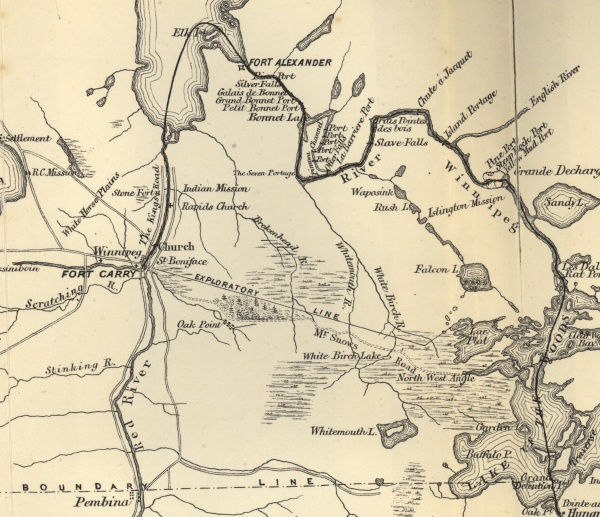 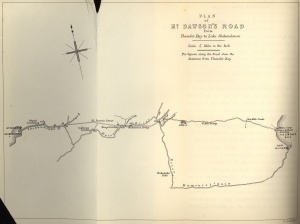 The Dawson Trail started on land as a trail heading northwest from Fort William along the Shebandowan River, up to Shebandowan Lake. From there, the trail followed a series of lakes and rivers heading west, eventually ending up at the Rainy River and Lake of the Woods along the International Boundary. After crossing Lake of the Woods, the land based portion of the trail continued at the Northwest Angle overland to Ste. Anne and then to its end at the Red River Colony. The total distance of the trail was approximately 530 miles (853 kilometres). Travellers were required to load and unload their freight as many as 70 times throughout the journey and would take approximately one month.

Before the route was completed, the Wolseley Expedition used portions of the trail to reach the Red River Colony and quell the Red River Resistance of 1870. However, much of the land portions of the trail where still incomplete at the time. Dawson and Wolseley disagreed over the road under construction. The engineer wanted to await its imminent completion to move men and material, while Wolseley insisted that since it was not finished, he would have to use the more difficult water based route in order to guarantee the arrival of his troops by the summer of 1870. This rebellion eventually led to the establishment of the Province of Manitoba later that year. In 1873, the Dawson route was used by some 1,600 people, however, most travellers still preferred to use the southern route through Duluth and Emerson, which was a much easier journey. After the completion of the railroad between Fort William and Winnipeg in the 1880s, much of the Dawson Trail was abandoned, although local residents continued to make use of the roads.

Segments of the old Dawson Trail are still in use today in both provinces. Ontario Highways 102 and 11 follow the Dawson Road from Thunder Bay to Shebandowan. From there, Highway 11 generally follows the original water route west to Rainy River.

In Manitoba, the abandoned road between the Northeast Angle and Richer has fallen into disrepair, but is still accessible via the Trans-Canada Highway from the north and Provincial Road 308 from the east. Between the communities of Richer and Lorette, Dawson Road has been incorporated into Provincial Road 207. In the city of Winnipeg, sections of Dawson Road remain active and bear the original name, but have been disconnected since the construction of the Red River Floodway and Lagimodiere Boulevard.