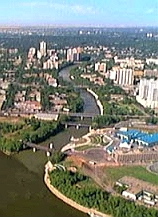 The project was constructed in three phases: 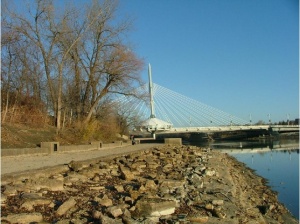 River Walkway on the Red River 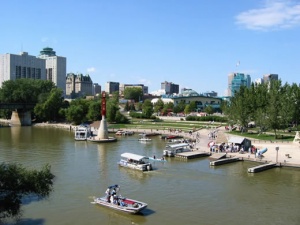 The walkway in the west bank of the Red River runs south from the Esplanade Riel pedestrian bridge to the confluence of the Assiniboine and Red Rivers, then turns westward in the Assiniboine to the port. This Phase 1 is a length of 0.7 kilometres.

From the port the walkway continues westward in the north bank of the Assiniboine to the Manitoba Legislature grounds, a distance of 1.1 kilometres. 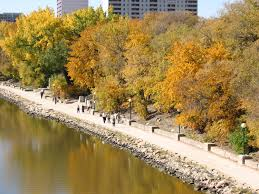 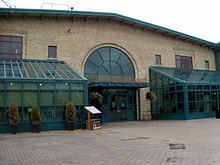 For at least 6000 years 'The Forks' has been the meeting place for early aboriginal peoples. From 1760 to 1921 the Hudson's Bay Company and the Northwest Company used The Forks to store and ship supplies and furs. It was the site of Fort Rouge, Fort Gibraltar and two Forts Garry. The Forks is an important historical and archeological site. The City of Winnipeg was founded at the junction of the Red and Assiniboine Rivers.

Much of the site was occupied by a railway yards until the 1960's. Part of the site was designated a National Historic Site of Canada in 1974 and developed as a park and commemorative site. Buildings like the Johnson Terminal, built in 1930 and the Forks Market were retained and developed into markets, shops, restaurants and other facilities.

The site affords continuous access to the rivers, access that is almost all blocked along the Assiniboine by apartments, and is only sporadically available along the Red. The walkway provides an attractive walkway along the rivers just above normal summer water level. 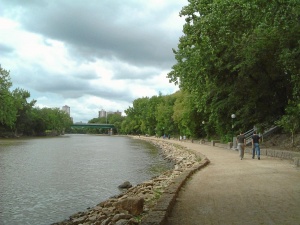 The walkway was constructed by placing quarried limestone rock in the river channel from winter ice level to one metre above summer water level. In general the front of the rock fill was sloped at 2 horizontal to 1 vertical or as required for bank stability. The top is surfaced with graded rock and finished with a fine rock walking surface. The river edge of the walkway is lined with limestone blocks.

The bank side is trimmed and protected with limestone blocks and upper bank protection where necessary. Lighting is installed on the bank side of the walkway. The light standards are removed for the spring runoff to prevent ice and water damage.

There are a number of nodes for access to the top of the bank and for rest and observation points as well as for canoe and small boat landings. The access nodes to the top of the bank have concrete stairs and wheelchair accessible ramps. Most of these structures are supported on piles. The port accommodates small watercraft and the 'Slap Dash' water taxi that plies the rivers during July and August.

Summer water levels at the junction of the Assiniboine and Red Rivers are controlled to a minimum level by the Lockport dam and locks. However, higher levels occur during spring runoff and summer and fall precipitation.

Construction in the rivers was carried out during the winter/spring after the water is drawn down to natural winter ice level conditions. Access is then possible from the sloping river bottom and the ice. Maintenance is necessary to clean silt deposited after high river levels

The walkway has been inundated during parts of the summer for 17 of the 22 years since completion.

A skating trail is developed on the river ice in winter. The trail has achieved fame for its record length and has been entered in the Guinness Book of Records.

The walkway is part of a 10 kilometre road race held each fall.