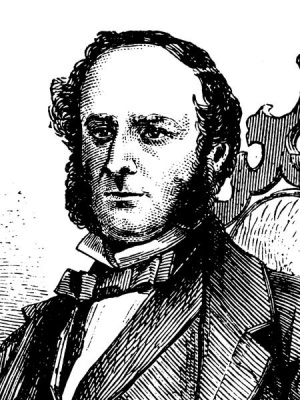 In 1857 Henry Youle Hind was one of the first known people to document and publish on the geology of Manitoba. He was commissioned by the Canadian government as part of an official expedition to explore and document the prairie river valleys in southern Manitoba.

Born at Nottingham, England on 1 June 1823, he attended Queen’s College, Cambridge for one year. In 1846 he immigrated to Canada. From 1848 to 1853 he served on the staff of the Ontario Normal School in Toronto as lecturer in chemistry and mathematics. In 1851 he became a member of the Canadian Institute, and in 1852 became first editor of the Canadian Journal: Repertory of Industry, Science and Art, Canada’s first scientific journal. He received an honorary MA from Trinity University, Toronto in 1853. From 1853 to 1864 he was a professor of chemistry and geology at Trinity College.

In 1857 the Canadian government appointed him geologist and naturalist to accompany an expedition directed by George Gladman, with instructions to examine the country between Lake Superior and the Red River, to determine the best route between the lake and the Red River Settlement. After there being issues with those on the expedition, Hind then became the expedition’s leader. He was instructed that “the objects to which your attention is requested are of a general nature, comprising a description of the main geological features of the country you traverse and whatever pertains to its natural history which you may have an opportunity of observing and recording.” The following year he was in command of the Assiniboine and Saskatchewan Exploring Expedition in 1858. His observations on the region - published for popular consumption in 1860 as Narrative of the Canadian Red River Exploring Expedition of 1857 - proved poor geology but first-rate travel literature and propaganda on the value of the West. He subsequently commanded the Labrador Expedition of 1861. In 1864 he made a geological survey of New Brunswick, and in 1869-1871 a survey of the gold fields of Nova Scotia. In 1877 he served with the International Fisheries Commission then sitting in Halifax.

Hind died in Windsor, Nova Scotia on 9 August 1908. He is commemorated by Hind Avenue in Winnipeg.

For further detail on the life of Henry Youle Hind see the Dictionary of Canadian Biography.