History Of Electric Power In Manitoba 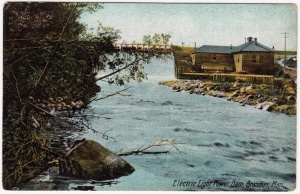 While there were several earlier instances of electricity generation in Manitoba, the first hydro-electric dam in the form we now know was on the Little Saskatchewan river, now called the Minnedosa River. Beginning operation in 1900, It served the City of Brandon ( Sorry Winnipeg, the Wheat city gets the honours here ) with 600 kilowatts of power via a 14 kilometre transmission line. The dam was made of wood filled with rocks and seems to have only operated in the summer months. Two units of 300 kilowatts each provided the current which was stepped up to 11kV for transmission along wooden poles to Brandon. There it was brought in to the existing steam generating facility to augment generation in summer. The Little Saskatchewan plant was the brainchild of three men who formed Brandon Electric Light Company Ltd. to provide steam generated power to Brandon around 1889. To increase capacity in summer and keep the costs down, they built the hydro-electric station. The site was decommissioned in 1924 and was probably damaged by the failure of an upstream dam in Minnedosa on 4 May 1948.

Pinawa Generating Station on the Winnipeg River started operation in 1906 by the Winnipeg Electric Railway Company, which held a monopoly on transit service, electric power and gas distribution for the City of Winnipeg. The first publicly owned generating station was Pointe Du Bois, upstream from Pinawa. It was completed in 1911 and is still in service today. In the 1920 and 1930s, three more generating stations were built on the Winnipeg River; Great Falls, Seven Sisters and Slave Falls. The four Winnipeg River stations would ultimately produce a total of 445 megawatts.

The boom of hydro-electric development came to an end with the great depression. In the early 1930s, power to municipalities in Manitoba was a patchwork quilt of contracts with differing rates and terms. The passing of the Municipal Power Commission (MPC) Act in 1931 started the process of bringing uniformity to power service and the MPC was supplying 139 communities by the end of the decade. Under the Act, the MPC sold power directly to end customers rather than to municipalities. City Hydro in Winnipeg remained as a municipal utility.

World War II caused a shortage of available farm hands and farmers petitioned the MPC for access to electricity. As a result, a farm electrification program started in 1945 with the aim of connecting 90% of Manitoba farms to the electric grid. In 1954 when the program ended, Manitoba was the most electrified of the western provinces with 75% of farms connected and a total of 100,000 customers. This was accomplished by careful attention to the economics of farming. Power line extensions were free and the farmer only paid for the in-building wiring and the power consumed.

The Manitoba Hydro-Electric Board

The success of the Farm Electrification program combined with the post-war boom brought new challenges in the early 1950s. Existing generation capacity would not support the new demand. Three of the largest players, City Hydro, the Winnipeg Electric Company (formerly the Winnipeg Electric Railway Company) and the Manitoba Power Commission along with the provincial government agreed to the creation of the Manitoba Hydro-Electric Board (MHEB) in 1949 to coordinate generation and distribution of power in Manitoba. The first MHEB generating station, Pine Falls entered service in 1951 adding 82 megawatts to the generating capacity of the Winnipeg River. In 1952, Seven Sisters was expanded to 150 megawatts which required the retirement of the first Winnipeg River station, Pinawa. The last station on the Winnipeg River, McArthur Falls, went into service in 1954.

In 1952 and 1953, reorganizations took place which separated the Winnipeg Electric Company's gas and transit operations into the Greater Winnipeg Gas and Greater Winnipeg Transit companies respectively. The remaining electricity operations and assets were amalgamated with the Manitoba Hydro-Electric Board. City Hydro and the Manitoba Power Commission split the distribution components between the City of Winnipeg and the suburbs along the 1955, pre-Unicity boundaries. City Hydro was renamed Winnipeg Hydro in 1964 and was bought by Manitoba Hydro in 2002.

There were several private generating stations built in Manitoba, some of which would become part of the provincial power grid. In 1913, the Minnedosa Hydro Plant was built just north of the town supplying power until 1933. A station was built in 1934-1935 at Kanuchuan Rapids on the Island Lake River to supply power for the new gold mines at Elk Island in God’s Lake. The mine closed in 1943 but the generating station continued to supply some power until at least 1966. There were also two stations built on the Laurie River north of Flin Flon by Sherritt Gordon Mines Limited. They provided power for mining operations in the 1950s and 1960s. They were transferred to Manitoba Hydro in 1970 and are still in service.

In 1960, the MHEB started operating the Kelsey Generating Station, the first one on the Nelson River, to supply power to the newly developed City of Thompson and the International Nickel Company's operations there. It was followed in 1965 by the Grand Rapids station on the Saskatchewan River. Both were connected to the provincial power grid in 1967 via a 230-kV line that ran between the two. The same line also furnished power to International Nickels's new Soab Lake mine.

Between the times of these two stations, the Manitoba Hydro-Electric Board and the Manitoba Power Commission merged to form Manitoba Hydro. The new utility began to work with power utility companies in the United States through the Mid-continent Area Power Planners (MAPP) on power exchanges with the 22 power utilities in the MAPP. In 1963, a Nelson River Programming Board was created by the Governments of Manitoba and Canada to investigate power development on the Nelson River and transmission of power to southern Manitoba by High Voltage Direct Current (HVdc) transmission. This work came to fruition in 1970 and 1971 with the commissioning of the Kettle Generating station and the first HVdc line from the Nelson River to Winnipeg. Two converter stations, Radisson near Gillam and Dorsey north-west of Winnipeg were built to support the connection of the direct current transmission line to the alternating current power grid. A 230kV AC transmission line was completed between Winnipeg and Grand Forks to allow power to be exchanged with utilities in North Dakota and Minnesota.

This made possible the operation of the 980 megawatt Long Spruce Generating Station, completed in 1979. During the same period, the second HVdc line was completed from the Nelson River to Winnipeg. Another generating station was planned at Limestone but it was deferred due to low electricity demands and finally started producing power in 1990.

Limestone Generating Station was to be last one to be built in the 20th century. Only one hydro-electric installation, the 200 megawatt Wuskwatim Generating Station on the Burntwood River, has been built since then in Manitoba. Completed in 2012, it is a joint venture between the Nisichawayasihk Cree Nation and Manitoba Hydro.

This article first appeared in the Spring 2015 issue of the Keystone Professional - http://www.apegm.mb.ca/pdf/Keystone/15Spring.pdf