In 1934-35, a 1900 horsepower hydroelectric generating station was constructed at Kanuchuan Rapids on the Island Lake River in the remote northeast of Manitoba to supply power for the new gold mines at Elk Island in God’s Lake. The power was transmitted to Elk Island via a forty two mile long transmission line. 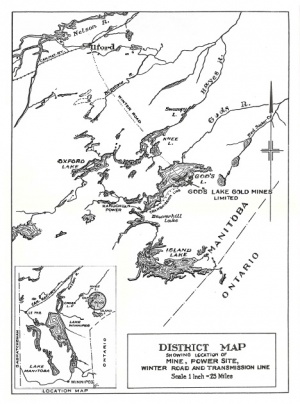 Access for personnel and small equipment was by small airplane on floats in summer and on skis in winter. Material and equipment was brought in on sleds by tractor train from Ilford. The route crossed the Bigstone River, Knee Lake on the Hayes River and Gods Lake. The 42 mile long transmission line commencing at Kanuchuan was located on the east side of the Kanuchuan River and Gods Lake. The line crossed Gods Lake to the southwest end of the island and ran on the island to the mill site.

In the fall of 1932 gold was discovered on Elk Island in Gods Lake by R. J. (Bob) Jowsey (http://mininghalloffame.ca/inductees/j-l/robert_j._jowsey) and Archie McDonald. The initial find was on Jowsey Island, a small island a few hundred metres west of Elk Island, while they were looking for a camp site. On October 18, 1933 Gods Lake Gold Mines commenced drilling their #1 shaft. A second shaft was developed 1.5 kilometres west near the present Elk Island lodge, where at least three additional shafts were sunk; Jowsey Island, Smelter Bay and Pumphouse Raise. Gold was mined from 1935 to 1943 (See Wiki on Gods Lake gold mines).

The Kanuchuan hydroelectric power project and transmission line was built to supply power for the mines and mill. The mill and town was built west of Shaft #2.

Kanuchuan Rapids and the transmission line route were surveyed in 1932. While information on the engineers who made the survey could not be found, the engineer was likely William O. Chase, M.E.I.C., Member of the Professional Engineers of Ontario, as Chase was involved in subsequent engineering. Chase noted in a subsequent report on alternatives that the Department of Natural Resources assisted with metering the flow in the Island Lake River.

On March 12, 1933, William O. Chase, R. J. Jowsey and E. L. Brown made a reconnaissance flight of 60 miles of the Gods River downstream of Gods Lake looking for a rumored 38 foot waterfall for a power site. No such rapids were found and they decided to investigate a 4 foot rapid 45 miles downstream of Gods Lake and 75 miles from the Elk Island gold discovery.

On March 17, 1933 a survey was conducted of the site and the river for 3 miles upstream. The high banks at the site and rapids upstream led them to believe a head of 27 feet could be developed. In addition, a control structure at the outlet from Gods Lake into the Gods River was investigated, potentially providing a flow of 4400 cfs by controlling the 400 square mile lake.

Cost estimates were prepared for a 12,000 horsepower power plant with 2 – 3000 HP units initially and 2 future units. The power would be transmitted by a 75 mile long 66 kV transmission line.

A report dated May 18, 1934 was prepared by W. O. Chase. The report compared the Gods River site to the Kanuchuan site and stated “If you (Gods River Gold Mines) believe that the probable requirements for power by your Company may ultimately reach the neighborhood of five thousand horse power, or if you believe that the total power requirements of the God’s Lake district may exceed that amount, then there should be no hesitation in preferring the God’s River site, rather than the Island River Kanuchuan site for development, by reason of its much greater ultimate capacity”.

Nevertheless, the Kanuchuan site was selected. It was designed by W. O. Chase and constructed in 1934-35. Design drawings by Chase are dated October 17, 1934 and revised to As Constructed 1934/35.

Mobilization was by Hudson Bay Railroad to Mile 286 near Ilford, then by tractor and sled train via the 130 mile winter trail to Gods Lake. Over 8200 tons of freight was hauled in for the mines, mill, and power development, 1600 tons for Kanuchuan. The freight for Kanuchuan was hauled in during the winter of 1934-35. It included the turbine, generator, 4 single phase transformers (1 spare), cement, steel frame building, construction equipment, camp, conductors, and many other items. 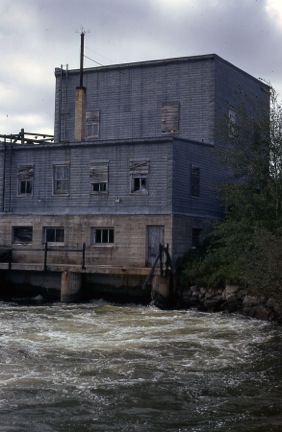 A 1100 foot long intake channel was excavated from the left river bank with the excavated material forming a dike on the river side of the channel for a distance of 700 feet, where it makes a 30 degree bend to the left cutting across a sharp bend in the river. The generating station is located 400 feet below the bend. The tailrace was excavated another 400 feet to rejoin the river. The picture on the left shows dump wagons used in the construction.

The intake structure consists of a floored timber crib base with five timber crib piers to make four 16 foot openings with stop-logs and trash racks. A rock fill dam 200 feet long with a clay blanket seal on the upstream face makes the closure between the intake structure and the crib work forming the spillway channel along the right bank. Normal operating head was 14 feet.

The generation equipment is an Allis-Chalmers 1900 hp, 144 rpm, 18 foot head vertical propeller type turbine with an elbow type draft tube. The generator is Canadian General Electric 1600 kva, 2300 volt, 60 cycle, 3 phase with a direct connected exciter. A bank of 3-1200 kVa single phase 44000/2300 volt O.I.S.C. transformers is located on the south side of the generating station with disconnects to switch the spare transformer. 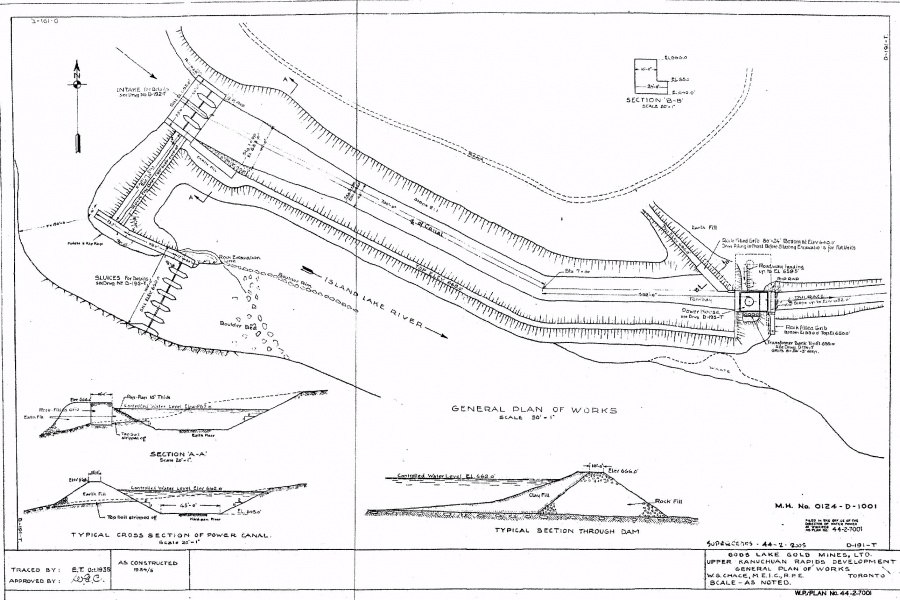 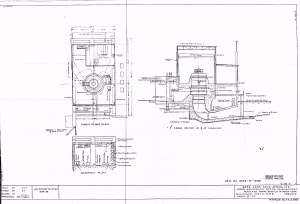 The spillway was constructed in 1937 to pass high flows in the Island Lake River. The spillway channel is approximately 150 feet wide leading about 200 feet to the spillway structure. The structure consists of 6 timber crib piers sheeted with 2 inch planks and 1 inch boards, which with the spillway channel crib formed six - 16 foot sluiceways, with 12” x 12” stop logs to control the flow. The centre pier is located over a 6 foot depression in the rock. The opening was filled a crib to support the pier and the adjacent space was filled with rock. A timber floor was placed over the rock fill. A sill for the stop logs was constructed of concrete about a foot high with a top width of 2 feet. 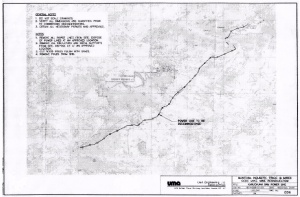 The 44 kV transmission line was built with 40 foot local wood poles and 2 cross arms. Poles were spaced at approximately 300 feet. The conductors were half inch diameter of 6 strands of aluminum and 1 of steel.

The 42 mile long line was on the southeast side of Gods Lake to near the southwest end of Elk Island. Here it turned west on a peninsula, reefs and timber cribs to Elk Island and the mill site.

While in operation the mine supported a local population of 400 people and a town that included a clubhouse, ice rink, movie house and church. The mine was shut down in 1943.

The power plant remained in service with a caretaker for a number of years supplying a small amount of power to a local camp. Manitoba Hydro’s 1966 report notes the station was still operating at reduced power and head as part of the spillway washed out.

The Kanuchuan project is not mentioned in ‘A History of Electric Power in Manitoba’ although Manitoba Hydro produced the report named in the References and two subsequent reports on hydro power in the area.

A tractor train of ore concentrate fell through the ice. It was known for many years the gold was at the bottom of the lake and an engineer who is also a diver, Bruce Kondratuk P. Eng., attempted to recover the ore in the 1980’s. The difficult conditions and high cost resulted in less than a break even on the sale of the ore and the project was abandoned.

In February 2001 Manitoba Department of Industry, Trade and Mines called tenders for safety and clean-up of the mine shafts and ancillary works including the removal of the transmission line poles and conductor. The work did not proceed until after a retender in 2007. A separate tender was called for the removal of the transformers and safety work at Kanuchuan such as closing hatches.

The Kanuchuan power project provided power for the gold mines at Elk Island in Gods Lake from 1935 to 1943. Up to 400 people were employed in the mines, a tremendous opportunity for the local First Nation communities. The economic benefit was significant for the area, Manitoba and Canada.