In 1857 Simon James Dawson was one of the first known engineers/surveyors to practice in the Province of Manitoba. He helped explore and survey a potential all Canadian travel route from Lake Superior to the Red River Colony. Once constructed this route would then be named after its creator and referred to as the Dawson Tail. 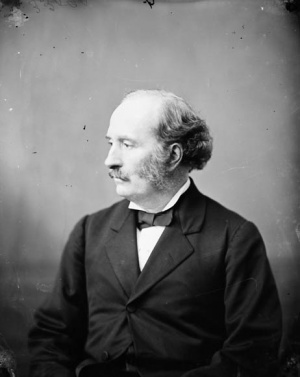 Dawson was born at Redhaven, Banffshire, Scotland, in 1820. He came to Canada and joined family members in Ontario around 1840. He obtained a number of government appointments as a civil engineer. In 1857 he was selected as a member of a Canadian government expedition along with geologist Henry Y. Hind to explore and surveyed a line of road from Prince Arthur’s Landing (later Port Arthur, now part of Thunder Bay, Ontario) to the Red River Colony (Winnipeg, Manitoba). They further explored the area again in 1858. In the expedition’s report, he dealt at length with finding a practical western route, proposing to use navigable waters in preparation for the railway. His report greatly stimulated Canadian interest in the West. Ten years later in 1868, shortly following Canadian Confederation, he was placed in charge of constructing a wagon and water route following his earlier survey by the newly formed federal Department of Public Works.

In 1870, prior to the routes completion, Dawson quickly brought his work force up to 1,000 men to help expedite the passage of the Wolseley Expedition on their way to suppress an uprising in the Red River Colony. Dawson and Wolseley disagreed over the road under construction. Dawson wanted to await its imminent completion to move men and material, while Wolseley insisted that since it was not finished, he would have to use a more difficult water-route in order to guarantee the arrival of his troops by the summer of 1870. He continued his disagreement with Wolseley in his Report on the Red River Expedition of 1870 (1871).

The route would later be named after its main creator and is referred to as the Dawson Trail, with the land-based portions more specifically referred to as Dawson Road.

For further detail on the life of Simon Dawson see the Dictionary of Canadian Biography.