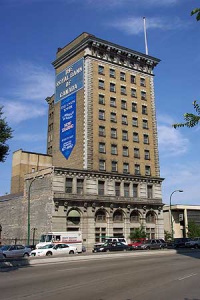 The Union Bank Tower is the oldest surviving skyscraper in Canada and is located in Winnipeg’s Exchange District. Construction began in 1903 and opened in November 1904. The 10-storey building was Winnipeg's first skyscraper, and was the tallest building in Winnipeg at the time of its construction.

The tower represented the latest in engineering technology for its time. It utilized a radically different type of support system that would allow designers to create taller, lighter buildings. The building was constructed with a network of steel and reinforced concrete that provided support for the brick and terracotta walls. The previously common building support system was that of wooden beams and posts or masonry. The tower's steel framing increased the overall rigidity and fire resistance of the structure compared to its predecessors. Local masonry buildings had reached six or seven floors, however, this new support system produced the city’s tallest structures at the time, and would become the most widely used system throughout the city.

Designed by two of Canada’s top architects, Frank Darling and John Andrew Pearson, initial construction of the building cost $420,000 and was built by two New York City construction firms: George A. Fuller Company and Thompson and Starret and Company. The frame of riveted interlocking girders was manufactured by Dominion Bridge of Montreal and rose above the foundation of 21 concrete caissons sunk to bedrock. The ochre brick came from the Lac du Bonnet brickworks. Rusticated terracotta and stone were also used throughout.

The building was initially built for Union Bank and eventually became their headoffice. The Royal Bank of Canada took over the Union Bank in 1925 and operated out of the Union Bank Tower until 1992. At that time the Royal Bank moved out of the building to a new location at James Avenue and Main Street. The building sat vacant for the next 18 years before being renovated, repurposed and opened as the Paterson Globalfoods Institute of Red River College in 2013. It was designated as a National Historic Site of Canada in 1996. 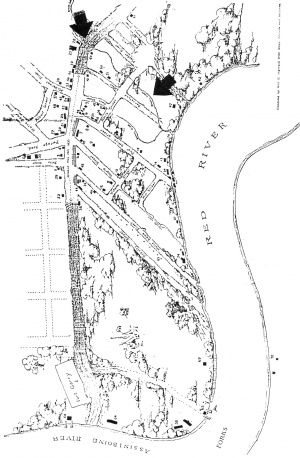 The land on which the building sits was originally part of the bed of Brown’s Creek, which ran from the Red River across Main Street approximately between the Union Bank Tower and City Hall. For a time, there existed a bridge on Main Street to aid in it’s crossing. It appears that buildings in the area witnessed sinking foundations and settling in the early 1890s as a result. The Union Bank Tower must have experienced the same problems, and in 1917 the bank spent $35,000 on 21 caissons down to bedrock to shore up the foundation.

However, this does not seem to be the final step in the stabilization of the foundation. In 1921, when the building immediately to the south was partially demolished and converted into an annex for the tower, additional work on the basement walls of the tower may have been completed. It has been suggested that when this conversion work was progressing, a horizontal section of the stone wall of the tower was removed and 400 to 600 specially designed jacks were placed in it. The entire building was then raised by these jacks, which were then cemented into place. No description of this work could be found in local newspaper accounts or in the columns of local or regional trade magazines or journals.

Notwithstanding the above issues, more recent engineering studies state that the tower is in excellent structural condition and has remained relatively stable for several decades.

The skyscraper was a by-product of technological advances and increased urbanization of the late 19th century. Steel frame construction, the elevator and rising land values made multi-storey buildings structurally and economically feasible. Between 1900 and 1916, twelve skyscrapers were built in Winnipeg, imposing on the city the verticality and high density of a modern urban core. All were monolithic structures decorated in a variety of styles. The classicised Bank of Hamilton (1916) and the Italianate style of the Union Trust (1912) typify Winnipeg’s early skyscrapers.