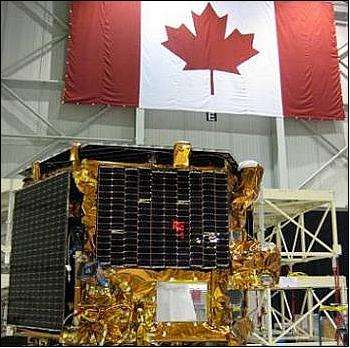 CASSIOPE is a satellite mission of the Canadian Space Agency, launched on September 29, 2013. It is a hybrid satellite consisting of two payloads: one scientific and one commercial. The scientific payload is the Enhanced Polar Outflow Probe (ePOP) run by the University of Calgary, and the commercial payload is the Cascade demonstration (Cx) from MacDonald, Dettwiler and Associates (MDA). MDA was the prime contractor for the mission, with Magellan Aerospace Winnipeg (formerly Bristol Aerospace) subcontracted to design and build the SmallSat satellite bus on which the two payloads are carried in space. CASSIOPE is an acronym for "CAscade, SmallSat and IOnospheric Polar Explorer."

Magellan Aerospace Winnipeg was contracted in 2005 to build the MAC-200 bus for CASSIOPE (previously Magellan Aerospace Corporation had built the MAC-100 bus for the SCISAT-1 satellite mission). The MAC-200 is a generic satellite bus intended to be used for multiple SmallSat missions. The bus is resposible for powering the spacecraft, thermal management, attitude determination and control, and communications with the ground via S-band. Magellan designed and built the Command and Data Handling units (C&DH) for the bus, which are the onboard primary and redundant computers that run the bus flight software. Magellan also helped develop the GAP instrument in the ePOP payload, as well as the deployable ePOP antenna booms.

The bus was delivered to MDA in March of 2008 for integration with the payloads. The ePOP payload consists of eight instruments designed to study the ionosphere. They are:

The Cx payload is a demonstration of MDA's Cascade Data Services, a store-and-forward courier service to transport digital data from remote locations of the earth.

The integrated satellite left Winnipeg for David Florida Labs in Ottawa for spacecraft-level testing in January 2009. From there, it was stored in a cleanroom at MDA's office in Ste-Anne-de-Bellevue outside of Montreal until the Falcon 9 rocket on which it was launched was ready in July 2013. 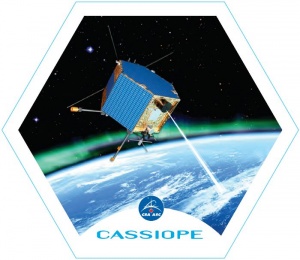 CASSIOPE was launched from Vandenberg Air Force Base at 16:00 UTC (11:00 Central Daylight Time) on September 29, 2013. The satellite was launched along with the CUSat, POPACS, and DANDE satellites, from SpaceX's new facility at Space Launch Complex 4 East (SLC-4E) at Vandenberg, on a newly upgraded Falcon 9 version 1.1 launch vehicle. The satellites were successfully launched into an elliptical 325 km x 1500 km low earth orbit at 80 degrees inclination.

Following on orbit commissioning of the various spacecraft units, CASSIOPE is intended to serve a 21 month mission. The satellite is operated by the Mission Operations Systems (MOS) located at the Rothney Astrophysics Observatory (RAO) outside of Calgary. It is jointly operated by the University of Calgary and MDA.