(December, 1936 - July, 2022)
Garland Laliberté was an agricultural engineer of Metis heritage. He was a professor of engineering at the University of Manitoba and went on to become the Dean of the Faculty of Engineering, and was the president of both APEM (Engineers Geosciences Manitoba) and CCPE (Engineers Canada). Throughout his career he was recognized countless times by the professional and technical societies to which he contributed and provided leadership. He died at Winnipeg on July 30th, 2022. 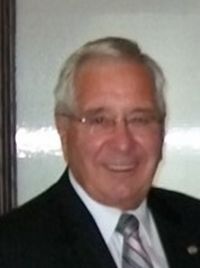 Born on the family farm in the Shell River Municipality in western Manitoba, he graduated from high school at the tender age of 14 and had the highest academic standing in his class. Garland started university at the University of Manitoba, and then went on to the University of Saskatchewan and graduated in 1956 at the age of 19 with a B.Sc. in agricultural engineering and then again in 1961 with a M.Sc. He continued on to the Colorado State University where he obtained his Ph.D in 1966 specializing in porous media physics.

In the early part of his career, he spent eleven years working for the federal government in the irrigated area of southern Alberta. There, he supervised the survey, design and construction of land grading projects to improve the efficiency of surface irrigation. He also carried out field and laboratory research on water movement through soil with application on irrigation and drainage projects and, in particular, on subsurface drainage.

He eventually moved back to Manitoba and took up a teaching position at the University of Manitoba as a professor of agricultural engineering. He continued with his academic career for the next 30 years at the University where he specialized in soil and water research, and authored and co-authored over 100 publications. During this time, he spent 17 years as the Head of the Department of Agricultural Engineering and from 1989 to 1994 he was the Dean of the Faculty of Engineering. Laliberté officially retired in 1996. Shortly thereafter he was awarded the honorary title of Dean Emeritus and continued in that capacity for many years.

In addition to his academic career he made significant contributions to the Association and to the engineering profession. Laliberté served as a council member from 1985 to 1990; and was APEM’s President in 1989.

He also served on the Executive Finance Committee, the Board of Examiners (now the Academic Review Committee), the Admissions Board, the Nominating Committee, and a number of other ad-hoc committees. In total, his contribution to these various committees amounted to the equivalent of 33 committee-years of service to the Association. Laliberté received the Association's Outstanding Service Award in 1994 for his unwavering commitment to the Association.

Laliberté served on the Board of the Canadian Council of Professional Engineers (CCPE, now Engineers Canada) in 1990. This was then followed up by serving on the Executive of CCPE for three years and was elected President of CCPE in 1994. In 1998 he was recognized by the CCPE when it presented him with its Professional Service Award. He also served with a number of agricultural engineering related associations and received many additional awards from them.

Laliberté was first registered with the Association of Professional Engineers of Manitoba in 1968 and continued his membership for 35 years. Then in 2003 the Association made him an honorary life member for his outstanding contributions to the Association and to the engineering profession.

In a correspondence with Dave Ennis in the fall of 2019, Garland shared that one of his most proud accomplishments was his involvement in the University of Manitoba, Faculty of Engineering’s, Engineering Access Program for indigenous students (ENGAP). “A moment that I recall in particular during my term as Dean of Engineering was having to call upon then Premier Gary Filmon's support to overturn a plan of the Manitoba Department of Postsecondary Education to eliminate completely the Department's share of the financial support for the Program.” It was this type of commitment that was instrumental in keeping the program going.

Laliberté continued to be active in retired life including participating in current Manitoba events that he was passionate about. He was a member of the Bipole III Coalition group from 2010 to 2018 who were a group of 'citizens influencing the future generation, use, and conservation of electricity for the economic development of Manitoba. He then was instrumental in creating the Manitoba Energy Council in 2018 which had as it’s mission statement ‘the Manitoba Energy Council believes that its expertise in most facets of the production, use and conservation of electrical energy in this province would be an asset to Manitoba Hydro in planning the delivery of electricity to Manitobans’.

Laliberté is a descendent of Jean-Baptiste Lagimodiere, a coureur des bois with the Hudson Bay Company, and Marie-Anne Gaboury who is considered the first women of European descent in western Canada, and grandparents to Louis Riel. At the age of 15, his grandfather Justin Laliberté was hired by the Hudson Bay Company as a Red River cart driver which was a part of an ox freight train heading from the Red River Colony to Fort Edmonton. The cargo for each cart was six 100-pound sacks of flour, and the round trip on the Carlton Trail took the entire summer. Laliberté himself started school on a small sleigh pulled by a sleigh dog. He learned to fiddle at an early age and continued to play Metis tunes with a bluegrass group at his winter home in Florida.