For a high level overview of this and other Manitoba Hydro projects see Hydroelectric Development in Northern Manitoba.

As of 2015, a significant amount of the province’s electricity is produced by five hydroelectric generating stations located on the Nelson River in northern Manitoba. The electricity generated must travel over a long distance to southern Manitoba where most of the electricity demand is located. It is more efficient and economical to transmit electricity over such long distances as Direct Current (DC) than Alternating Current (AC) (see Background on the planning of the HVdc Transmission). A high percentage of the existing generation is connected to two northern converter stations which convert the AC electricity coming from the generating stations to DC electricity for transmission to southern Manitoba. Once there, the DC electricity is converted back to AC electricity. The southern converter station then uses transformers to step down the voltage for distribution to customers.

Components of the existing HVdc transmission system are:

Bipoles I and II

The HVdc transmission lines are a set of bipolar transmission systems called Bipole I and Bipole II. The term bipole refers to a positive (+) pole and a negative (−) pole on each Bipole transmission line. Each pole is further comprised of two 1.5 inches (4 cm) diameter conductors that are supported by steel transmission towers as shown in Photos 1 and 2.

Bipoles I and II deliver over 70% of the generating capacity from the Nelson River in northern Manitoba to southern Manitoba. 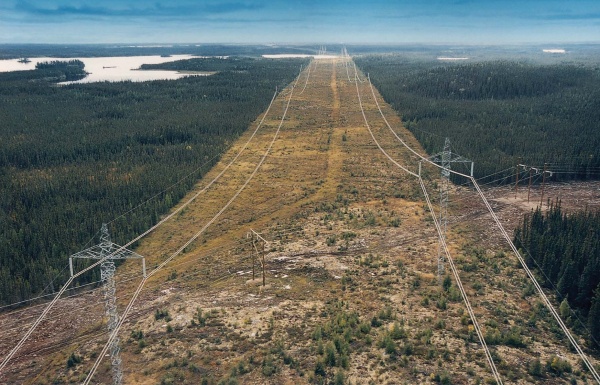 Photo 1: Bipoles I and II Right-of-Way 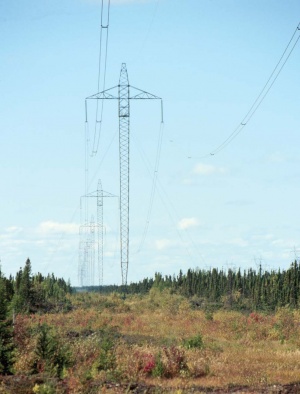 Bipoles I and II Project Data

An aerial view of the Radisson CS is shown in Photo 3. The Radisson CS is the northern terminus of Bipole I and is located 1.2 mi (2 km) south of the Kettle Generating Station (GS) and about 460 mi (740 km) north of the City of Winnipeg by air (Map 1). It converts the AC electricity produced at the nearby Kettle GS and Long Spruce GS on the Nelson River to DC electricity for transmission south to the Dorsey CS. The Dorsey CS converts the power back to AC electricity then uses transformers to step down the voltage for distribution to customers. 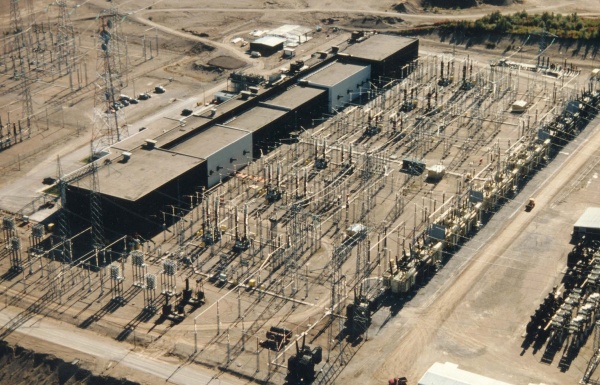 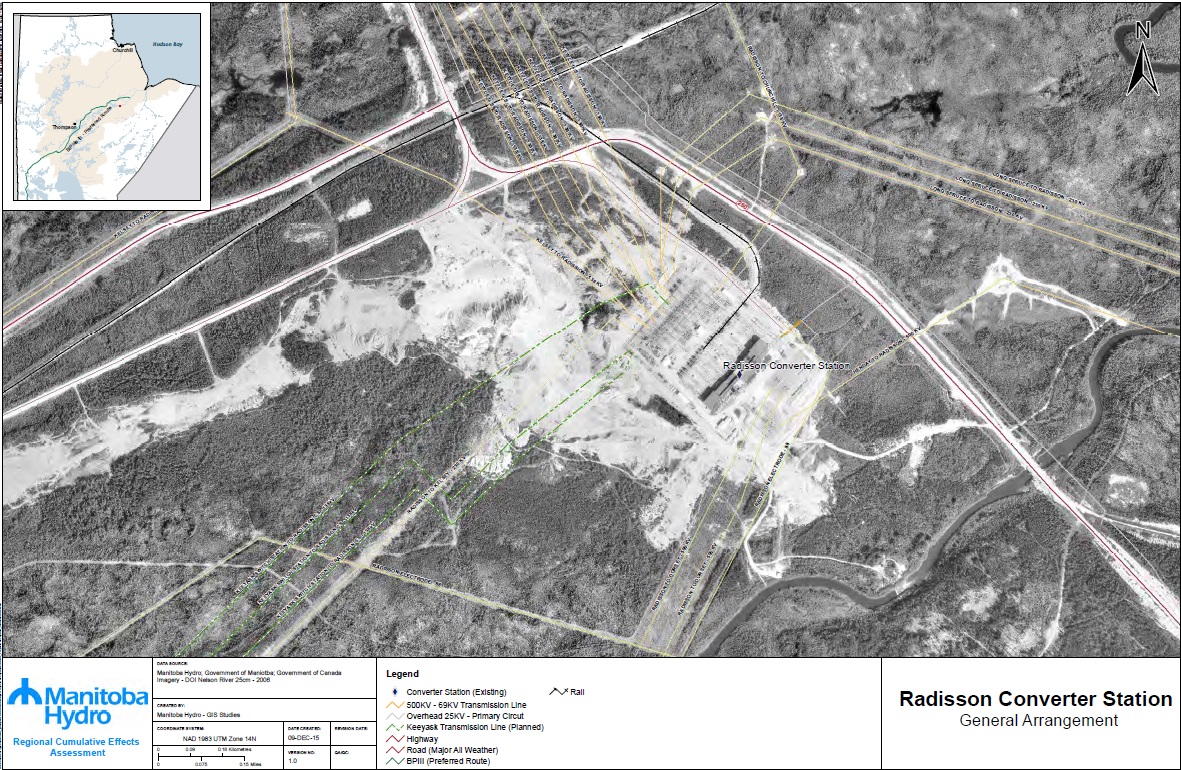 AC switchyard: The electricity produced at the Kettle GS and one-half of that produced at Long Spruce GS enters Radisson CS at its 138 kV switchyard. The switchyard which contains the high voltage breakers, disconnect switches, and AC filters directs the incoming AC power to the converter transformers.

Valve halls: At the heart of the converter process are the converter valves, which are located in the valve halls within the converter building which also contains the maintenance shops, the control, mechanical, and electrical rooms.

HVDC switchyard: Electricity converted to DC leaves Radisson CS from the HVDC switchyard and is transmitted south to Dorsey CS. This switchyard contains the necessary switches for isolation or connection of the poles from and to the DC transmission lines.

The Henday CS (Photo 4; Map 2) is the northern terminus for Bipole II. It is located next to the Limestone GS and is 26 mi (42 km) northeast of the Radisson CS. 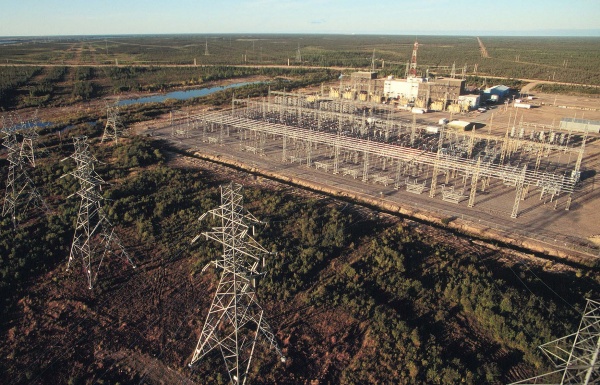 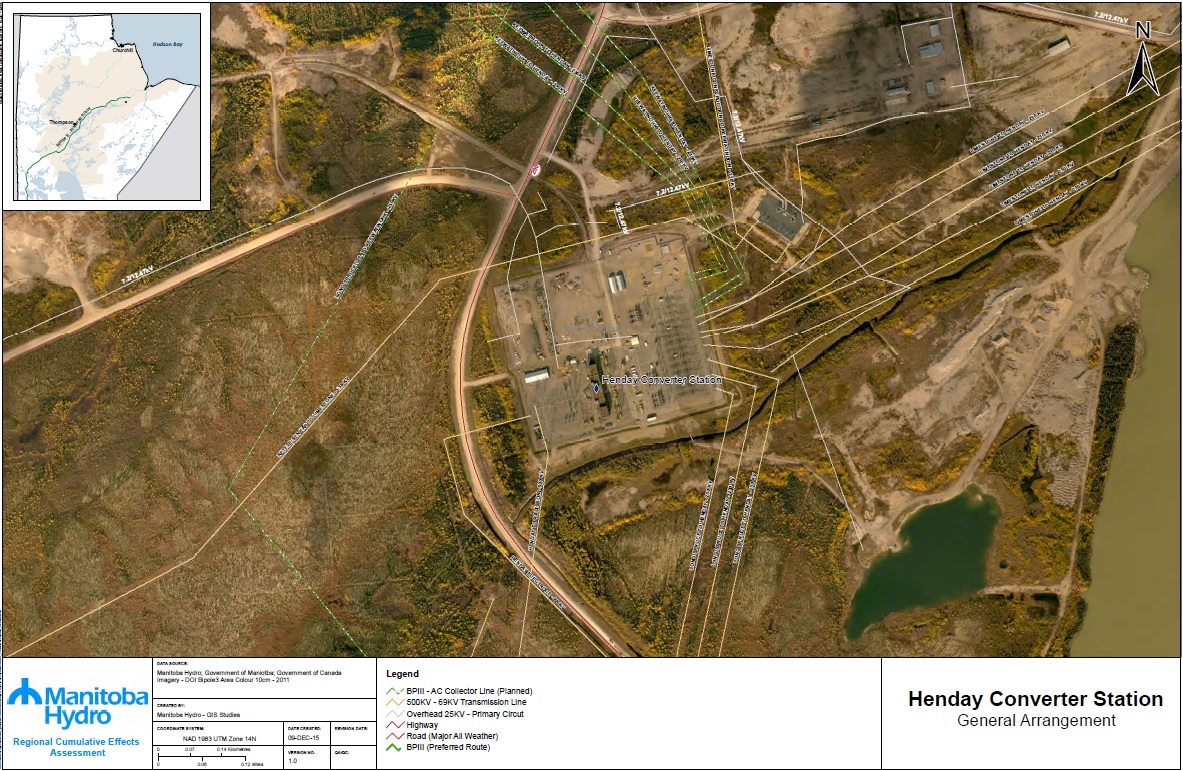 Valve Halls: The actual conversion process takes place in the valve halls. They are located in the converter building, which also contains the maintenance shops, the control, mechanical, and electrical rooms.

HVDC switchyard: Electricity converted from AC to DC at Henday CS is transmitted south to Dorsey CS via the DC transmission line. The switchyard contains the necessary switches to shut off the current if Bipole II is not working, or to switch the current over to Bipole I, if enough room is available to carry the current.

Main access to the region during construction was by the Hudson Bay Railway line (now HBR; Canadian Pacific Railway (CNR) at the time) which had a rail station and siding at the Town of Gillam. A 0.6 mi (1 km) rail spur was added near the Kettle GS site to the Radisson CS site as part of construction. A new 4.4 mi (7 km) permanent gravel road was built from the Town of Gillam to the Kettle GS site and the Radisson CS site to link these projects to the community. The Town of Gillam was not connected to the provincial road network until after completion of the projects. The community has had a permanent airstrip since 1967, which was used as required during construction.

Access to the site was by a 14 mi (23 km) extension of the permanent gravel access road at the Long Spruce GS and a 1.5 mi (2.5 km) rail spur from the Hudson Bay Railway line (now HBR; CNR at the time) to the Henday site. The access road was not connected to the provincial road network until just after completion of the converter station.

Construction on Bipole I started in 1968 and was completed in 1971. Routing of the line included large tracks of muskeg country, providing difficulties for construction. For economic reasons, construction of the line had to be undertaken during winter months when the ground was frozen to allow for the passage of heavy equipment.

Construction started in 1970. It began transforming power from the Long Spruce GS in 1978 and from the Limestone GS in 1990.

Various temporary mobile construction camps and access trails on or adjacent to the transmission line right-of-ways were used for the construction of Bipoles I and II.

Communication System: An essential component of the HVdc transmission line system is a complex high-performance communications system that is used to protect and control the HVdc Transmission System. Prior to 2004, the communication system consisted of two microwave systems each linking the Radisson and Henday converter stations in the north to the Dorsey CS in southern Manitoba. This dual route microwave system was operated to protect and control the HVdc Transmission System and other facilities in the north, such as the Grand Rapids, Jenpeg, and Kelsey generating stations.

One of the microwave systems follows a route through Manitoba’s Interlake corridor while the other was located on the east side of Lake Winnipeg. In October 2004, Manitoba Hydro replaced the east of Lake Winnipeg microwave system with a new fibre optic cable system installed in the Interlake corridor. This new fibre optic cable works alongside the remaining Interlake digital microwave system, providing enhanced reliable communications for all major substations and generating stations along the 653 mi (1,050 km) route as well as facilitating voice and data communications at district offices and other Manitoba Hydro facilities.

Radisson Converter Station: The former construction waste disposal ground was investigated in early 2001, with a subsurface drilling investigation (Phase II Environmental Site Assessment) conducted later in 2001 and into 2002. Groundwater monitoring and sampling has been conducted on an annual basis since 2002.