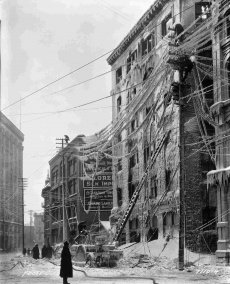 Damage after a 1921 fire. (Courtesy of the Provincial Archives of Manitoba, Foote Collection N1824) 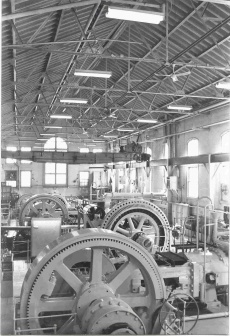 Winnipeg’s first water system began in 1882 when a private company, Winnipeg Water Works Co., drew water from the Assiniboine River and distributed water by pipes to homes and businesses in the city core. The company’s intake and pumping facilities were on the north bank of the Assiniboine River at the Maryland Bridge. However, fire protection for the mainly wood buildings was inadequate, resulting in loss of life and property, and high insurance costs. In 1899, the City of Winnipeg purchased the system and began to use artesian wells rather than the foul river water. In 1904 a serious fire on Main Street threatened the entire business district and forced the City to pump Assiniboine River water into the mains. The contaminated water resulted in a typhoid epidemic with 1300 cases reported in the following days.

Winnipeg was experiencing an economic and population boom during the 1890’s through the 1920’s. Shortly after the 1904 fire, the Fire Underwriters’ Association reported to Council that ‘the city would find itself deficient of 3 million gallons of water based on the present rate of service, with over half the homes not yet serviced by water mains’. The City’s groundwater pumping station and 6.3 million gallon reservoir was located on McPhillips Street near Logan Avenue, three kilometres from the business district. In 1905 a new 10 million litre per day well was dug but with the rapid population growth the supply was still inadequate. There was also a concern about drawing the water table down below the river level and thereby introducing contamination.While studies were undertaken on ways to develop an abundant supply of fresh, safe, potable water, City Council directed its engineer, Col. Henry Ruttan ‘to determine a long term solution to providing the rapidly growing business district with adequate fire protection in a manner which would not impair public health’. Large warehouses with wooden post and beam construction were springing up all over the warehouse district. These warehouses were part of a growing trade that supplied all of western Canada. A major problem the entrepreneurs were facing was Winnipeg's high fire insurance rates because of the limited ability of the fire department to fight fires.

It is interesting to note that one of the largest fires in the city was the J.H. Ashdown Hardware Store (Winnipeg’s merchant prince) on Main Street. In 1906 Ashdown won the city election for Mayor running on a platform recommending city ownership of utilities. 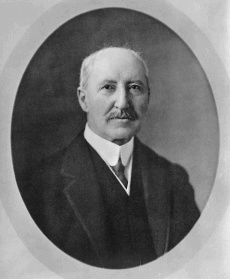 Born in Ontario in 1848, Henry N. Ruttan learned engineering on the job with the Grand Trunk Railway starting in 1868. He also worked with Sanford Fleming, who was building the Intercolonial Railway. In the 1870’s he began a two year study of municipal engineering, and, after working for municipalities in Ontario, came to Winnipeg in 1880 to start his own engineering business. In 1885 he was appointed the City Engineer, a position he held until retirement in 1914.

Ruttan was a staunch proponent of public ownership of utilities, including the City's own power system, quarry, and asphalt paving plant. He oversaw the infrastructure for a population growth from 16,000 in 1885 to 130,000 at his retirement.He was an active supporter of the engineering profession and a charter member of the Canadian Society of Civil Engineering and was its president in 1910.

The high pressure system to give fire protection for the large buildings in the downtown was built at a cost of $1million, largely borne by the businesses along the 12.8 km of high pressure mains. [With today’s purchasing power the cost would equal over $25M.] The mains and 70 hydrants were separate from the domestic water supply. The pumping system consisted of 3 main structures: the river intake and pumping station, the gas producing plant, and the gas storage tank. The design is a model for engineering with a careful view to reliability based on redundancy. 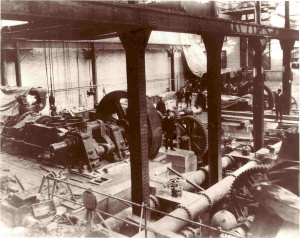 Pumping station interior, during construction 1906. (Courtesy of City of Winnipeg)

The pumping station building is 48 m by 28 m, steel frame, faced with buff coloured brick above a concrete substructure. The building is divided into 2 gabled bays, each having a crane running the length of the interior. The engine floor is 5.5 m below grade and the six pumps are in a trench below this. The pump suction and discharge header pipes are 600 mm in diameter, in duplicate, all six pumps being connected to both pipes, either being sufficient capacity for the whole plant. The suction header is connected to a two compartment wet well. The water was conducted to the wet well by a 900 mm wood stave intake pipe that extended 130 m from the well to deep water in the river where a stone ballasted crib was located. In 1919 the station was connected to the new aqueduct, a source preferable to the muddy water of the Red River.

The pumps are triplex double acting piston pumps. The water was pumped into the mains at a pressure of 2,109 kpa (300 psi). The pumps were supplied by W. Jacks and Company of Glasgow. The six 2-cylinder gas engines were built by Crossley Brothers of Manchester, England. The engines for the larger pumps were 402 kW (540 hp) each and for the smaller pumps, 186 kW (250 hp) each. Steam and electricity to power the pumps were out of the question due to high standby costs. Standby costs for the gas engines were minimal. Upon receipt of an alarm by telephone or fire box through the Central Fire Hall, the pressure automatically increased. Although the system consisted of a maze of valves, motors and pumps, all six pumps could be started and working to capacity in three and a half minutes from receiving a call. The first of the pumping units was placed in service in November 1907, and the remaining units were completed by July 1, 1908 when the whole plant was practically completed and the operation was taken over by the city. 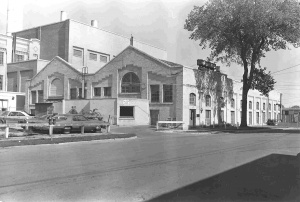 Pumping station with coal plant in background, 1980. (Courtesy of City of Winnipeg)

The gas producing plant was attached to the pumping station. Coal or coke was heated in 4 boilers to produce a gas under pressure. The gas was filtered, cooled, and piped to the gas storage tank east of the pumping station.The plant had four massive Crossley type producers: two 373 kW (500 hp), and two 745 kW (1000 hp), with the necessary platforms, hoppers and piping. The plant had an overload capacity of fifty percent with selected coal and could make gas from anthracite, lignite, or any non-caking bituminous coal. The coal was delivered on railway track adjoining the building and unloaded via a hopper.

An elevator fitted with rotary feeding gear ensured regular feed without choking and raised the coal above the producer hoppers. The elevator and conveyor were operated by a steam engine. Two air super-heaters with gas and air connections and dust collectors were attached to the producers. Each unit was supplied with a hot gas tubular boiler.Four wet scrubbers, fitted with tar sieves and filled with coke, removed the condensable hydrocarbons from the gas. Three centrifugal tar extractors completed the removal of the tar from the gas.Two sawdust scrubbers, either of which was capable of removing any remaining impurities from the gas were placed near the inlet to the gas holder.

In addition, centrifugal circulating pumps and Root air blowers were provided. The cleaning plant was operated by two 13.4 kW Crossley engines, either of which had capacity to drive the whole plant. An important feature of the installation was that there was a spare unit of each type of machine, so that in case of a breakdown, the plant could still be operated to its rated capacity. Two steam boilers furnished additional steam for the producer and also drove the elevator and blower engines, and supplied steam for heating the buildings.The gas holder and pumping station was connected with the city gas mains by a special 12” pipe for a full supply of gas should the producer gas system be out of service.The gas holder tank was steel with a facing of brick with the capacity to supply the pumps for from 1 ½ to 5 hours depending on the number of pumps running.

Two 500 mm fire system water mains were installed from the pumping station to Main Street by different routes, connected with sub-mains on the way. Each main had the capacity to take the water from the pumps when working to their rated capacity. Approximately 12.8 km of high pressure mains and 70 hydrants were installed to protect the city core. The mains ran on Main Street from Higgins Ave. to the Assiniboine River and on Portage Ave. from the Red River to Osborne Street, and on other streets.The mains were designed for a working pressure of 2,109 kpa and the ability to withstand water hammer. The mains were tested at the foundry, and after installation were tested from 3,515 kpa to 4,922 kpa. The pipes were provided with extra heavy hubs and two lead grooves and operated entirely satisfactory.

The hydrant valves were provided with pilot valves to fill the hydrant before opening the main valve against the pressure. Both valves were operated by the same stem.

Impact on the City

The dedicated high pressure system was very successful and no building adjacent to a burning building was lost afterward due to a lack of water. As a result insurance rates declined and the City continued its dizzy expansion. It was said that the water pressure generated by the pumping station could reach the height of a three story building as far away as Portage Ave. and Sherbrook St. at the site of the newly formed Manitoba Government Telephones’ (MTS’s forerunner) large telephone exchange building being built to service the St James area (then outside the city of Winnipeg).

A Heritage Project Even in 1908

When it was constructed in 1908 the high pressure system was one of the largest, most sophisticated, in the world. It was one of only two high pressure fire fighting systems in North America. The British Association, held its 1909 annual meeting in Winnipeg, and the members arranged a ‘Visit to The City Water Works High Pressure Plant, Artesian Well System’ on Monday, August 30. The published invitation stated ‘Colonel H. N. Ruttan, City Engineer, has kindly consented to act as guide to the party’. For the visit, he prepared an eight page description of the system entitled ‘Winnipeg’s Water Works’ which largely featured the high pressure pumping station and fire fighting system. [The British Association rarely traveled outside of the UK for its annual meetings and in 1909 it would have been a long and arduous journey.] In 1910, Col. Ruttan presented a paper on the innovative project at the AWWA (American Water Works Association) Convention in New Orleans which was published in the Conference Proceedings.

The gas producing plant and storage tank were demolished in 1962 when the pump engines were converted to natural gas and electricity. The pumping station was taken out of service in 1986, a victim of high operating costs, deteriorating water mains and modern pumper trucks that offer firefighters greater flexibility. But not before the station had been declared a Grade II heritage building by the Winnipeg Planning, Property, & Development department in 1982.

After the building was shut down in 1986 it was given to Winnipeg’s CentreVenture corporation for development. CentreVenture sold it in 2001, including the original equipment and machinery, for $159,000. Later, CentreVenture had a change of heart after a nightclub was proposed for the building, and bought it back for $750,000. The most recent proposed use occurred in April 2010 when the press reported a market garden organization was contemplating using the lot for an outdoor market in the summer and the building for an indoor market in winter. To date it remains undeveloped minus a large piece of machinery which the interim owners donated to a heritage museum in Austin.

What Can We Learn?

The James Avenue Pumping Station has lessons for all of us, as engineers and geoscientists in today’s hurly burly fast paced world. Here are some that come into the Heritage Committee’s collective thoughts: