The first phase of development was initiated in the spring of 1966 and included the following components:

The long range view was that the Kettle Generating Station (GS) would be the first in a series of generating stations intended for the lower Nelson River.

The Kettle GS is located at the site of the former Kettle Rapids on the lower Nelson River. It is approximately 4.4 mi (7 km) west of the Town of Gillam and 1.9 mi (3 km) upstream from the Canadian National Railway's (CNR) river crossing near the town. The distance from the City of Winnipeg to the Kettle GS is over 460 mi (740 km) by air. 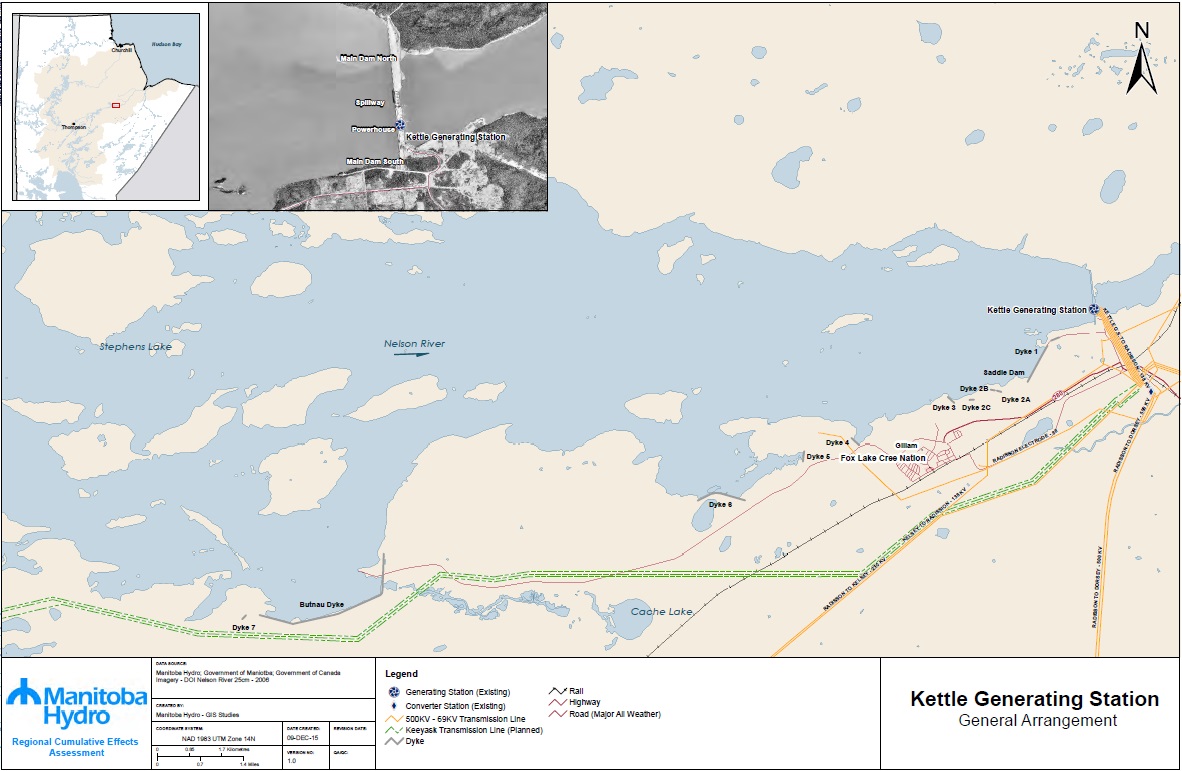 The station spans a total of 0.9 mi (1.5 km) across the Nelson River and consists of a close-coupled intake/powerhouse with 12 turbine generator units (units), concrete wing walls, non-overflow dam, two main earthfill dams (north and south), ancillary dams and dykes, and an eight bay gated spillway (Photos 1 and 2, Map 1). A series of dams and dykes flank the Nelson River to reduce the extent of flooding from the project (Photo 3). 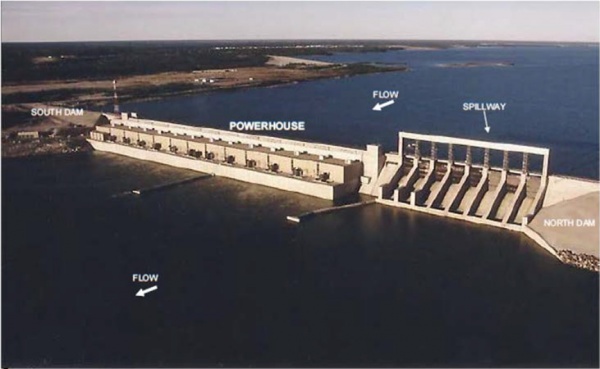 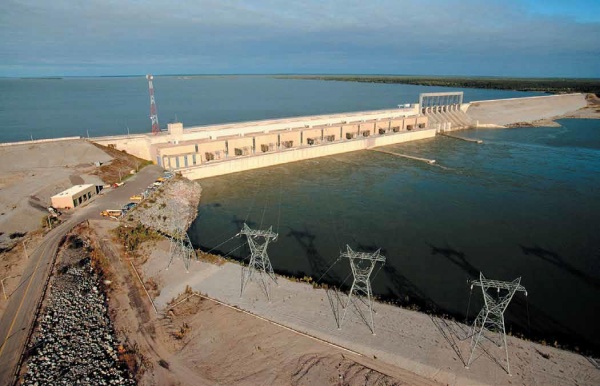 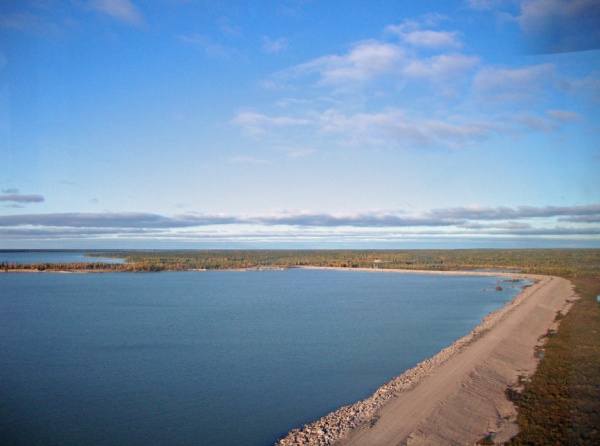 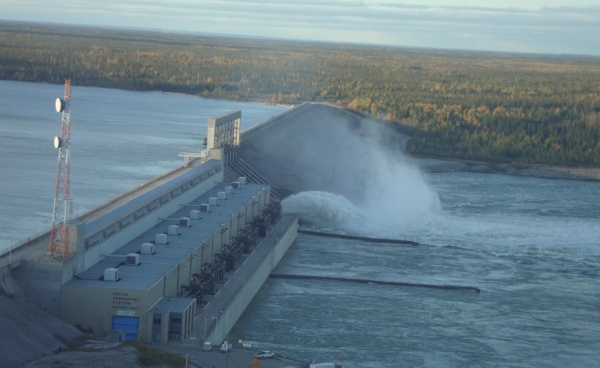 Main access to the region during construction was by the Hudson Bay Railway line (now HBR; CNR at the time) which had a rail station and siding at the Town of Gillam. A 1.0 mi (1.6 km) rail spur was added near the generating station site. A new 4.4 mi (7 km) permanent gravel road was built from the Town of Gillam to the generating station site and the Radisson Converter Station site to link these projects to the community. The Town of Gillam was not connected to the provincial road network until well after completion of the project. The community had a permanent airstrip since 1967 that was utilized as required. 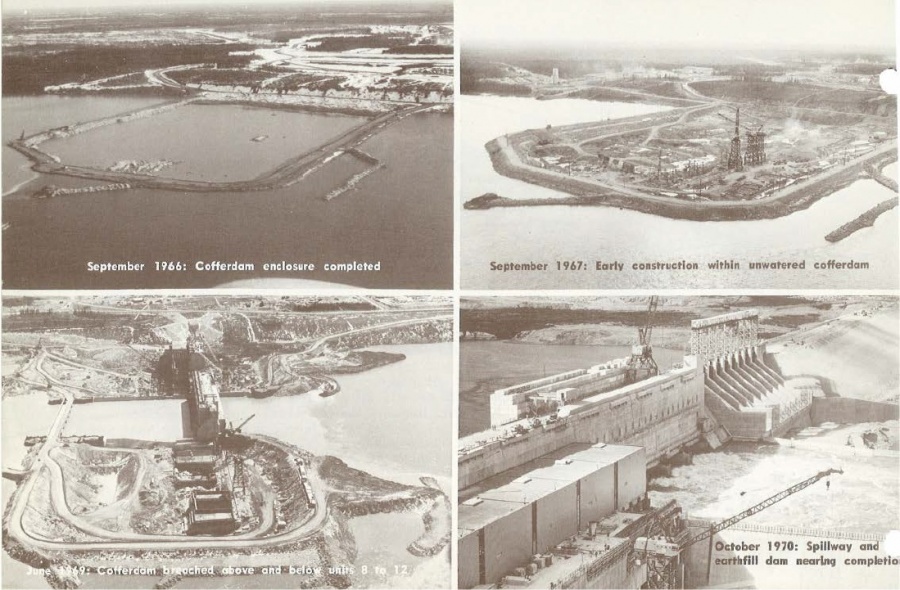 Most of the construction workforce lived on site in camp while a small percentage lived and commuted from the Town of Gillam on a regular basis.

Clearing of Kettle’s forebay was undertaken immediately upstream of the powerhouse with impoundment beginning in 1970. A dam at the outlet of the Butnau River along with a series of dykes along 15 mi (24 km) of the south shore of Stephens Lake (neer Moose Nose Lake) were built to contain flooding from the backwater effect from Kettle’s forebay. The Butnau River is a tributary of the Nelson River whose flows were cut off by one of these earthfilled dams at Stephens Lake. As a result, it was diverted into the adjacent Kettle River which flows north downstream of the Kettle GS into the Nelson River. To achieve this a 2.5 mi (4 km) long, 60 ft (18 m) wide channel was built from Cache Lake to the Kettle River to redirect the Butnau River.

The first unit went into service in December 1970 and by the time the generating station was officially opened in June 1973, seven units were in service. The twelfth and final unit was up and running in November 1974. With the completion of all its units the Kettle GS became Manitoba Hydro’s largest generating station in its system. It maintained this status for nearly two decades until the Limestone Generating Station came into full service in 1992. Development of the Kettle GS resulted in Moose Nose Lake forming part of the Kettle forebay which was subsequently named Stephens Lake.

A temporary construction camp and associated work areas were established near the site. In 1966 and 1967, a 79 mi (127 km) 138 kV transmission line was built from the Kelsey GS to the site of the future Radisson Converter Station to provide power for upcoming construction activity. Short tie-ins from this line provided electrical power to the Kettle GS construction area and to the nearby Town of Gillam, which was about to undergo a major expansion.

Workforce: The station has approximately 30 to 35 staff comprised of the following: operating staff, maintenance staff (electrical, mechanical, utility), support staff (administration, stores) and supervisory staff. The station is fully staffed every day between 0700h and 1800h. Outside of normal business hours the Kettle GS is controlled by operating staff at the Long Spruce GS. The Kettle GS operating staff are on call and would be dispatched in case of an alarm or to initiate spill. Additional support and technical services are located in the nearby Town of Gillam.

Public Safety: The Kettle GS has a portage around the site and the following public safety features:

Water Regime: The Kettle GS is operated in a daily and weekly cycling pattern that allows Manitoba Hydro to match energy production to consumption patterns. For more details on operating parameters and their effects on the water regime (see Water Regime, Section 4.3.4.3).