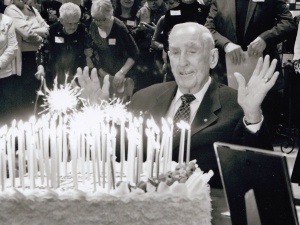 Les grew up in Whitemouth, Manitoba, with one year spent in Port Arthur (now Thunder Bay) in Ontario to complete his high school, a year that would play an important role later in his career. The next year he returned to Whitemouth to help his father with the family farm and brickyard. A few years later, he was able to realize his dream and graduated with a degree in electrical engineering from the University of Manitoba in 1939. But more twists and turns awaited. 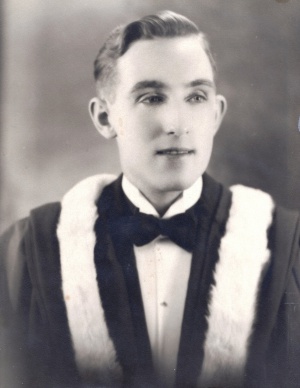 Les Wardrop: U of M Engineering Graduation in 1939

Since employment as an electrical engineer in Winnipeg in 1939 was unlikely, he decided he should also get a civil engineering degree to improve his chances of employment. However, he first worked another year with his father back in Whitemouth.  He put 23,000 miles on their 2-ton Ford truck and trailer hauling bricks to Winnipeg before he was able to return to the University of Manitoba to take civil engineering. It was during this time, that he met his future wife, Olive McLean at the boarding house where they were both staying. They were married in Kingston, Ontario on November 29, 1941. He completed his first year of civil engineering in 1941 before World War II interrupted his studies. With his electrical degree he joined the Signal Corps. Second Lieutenant Wardrop saw postings in Victoria, B.C., Kingston, Ont., Delbert, N.S., London, England, and Darwin, Australia. In his spare time Les played for the Signal Corps hockey team, triumphantly scoring an overtime goal in a final game at Maple Leaf Gardens. 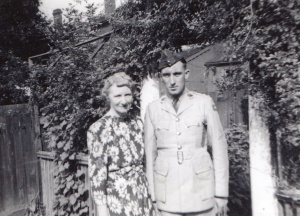 Les Wardrop: In Military Uniform with his wife Olive

After the war, Les took a part time job with the City of Winnipeg Engineers Office as a draughtsman while completing his civil engineering degree in 1947. He immediately joined the City engineering department, completed special projects, and became Engineer of Waterworks and Sewage with a staff of 250 by 1949.  Six years later, in 1955, he founded W. L. Wardrop & Associates with a staff of four, promising them one year’s work. 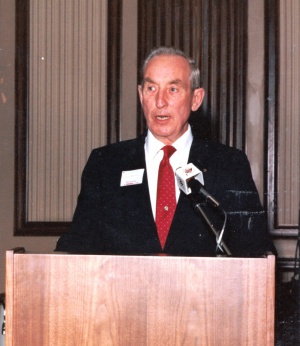 One of the new company’s first assignments was the 750 acre Windsor Park residential development. In 1956 he opened a second office in Port Arthur, Ontario and, shortly after, a third office in Regina, Saskatchewan. It was his vision to have a national company. Under Wardrop’s leadership the company continued to grow and offer new services. He was legendary for his attention to detail and grasp of new technologies and disciplines. Les would personally delve into each new field, spending countless hours researching the discipline, learning the intricacies of the technology, determining user-sector needs and formulating a marketing and business plan.

Besides Windsor Park, among the firm’s early recognizable projects are the Portage Avenue overpass at Polo Park, the Pembina-Jubilee interchange, Bishop Grandin Boulevard and related bridge over the Red River, the Pinawa town site, the servicing of Winnipeg Beach, the Selkirk Water Treatment Plant and the Radar Station at Gypsumville.

Wardrop’s vision was for his company to be a leader in its field. In 1966 he attended an IBM sponsored seminar on a new “1130” computer. He saw the value in the new tool and had the company’s first computer installed in a 6m x 6m air conditioned room. The company was at the forefront of using computers for engineering in Winnipeg for many years. In the 1970’s, Wardrop launched projects in West Africa and the international division was created. The Edmonton office opened and services expanded to include pulp and paper, nuclear and solar energy.

After his retirement from full time employment in 1980, Les  served on the board of directors and as a consultant. During this time computerization and advanced technology were the primary thrust, and in the 1990’s the focus expanded to sustainable development, space stations, computer software design tools and information management.

Les Wardrop was very active in the Association of Professional Engineers(APEM), (now Engineers Geoscientists Manitoba), serving as President in 1959-60 and 1960-61. He served on many committees. In 1977 he received the Meritorious Service Award from the APEM for his extraordinary engineering achievements and community involvement. 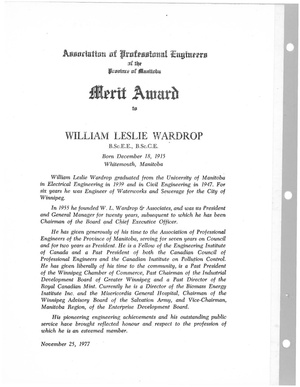 Les maintained a close relationship with the University of Manitoba Faculty of Engineering. He served as principle organizer of the homecoming events for each of his two graduating classes.  Notably he was one of the first volunteers, in 1988, to join the unofficial campaign for the new Engineering and Information Technology Centre which opened in 2005 when he was 90. In 1990 the University of Manitoba Faculty of Engineering dedicated the “Les Wardrop Reading Room” at its Library in his honour. 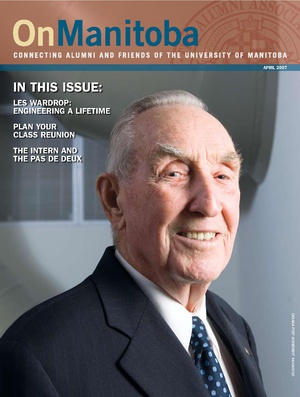 In January 2007 Les became an honorary chair of the committee to celebrate the 100th Anniversary of the Faculty of Engineering. 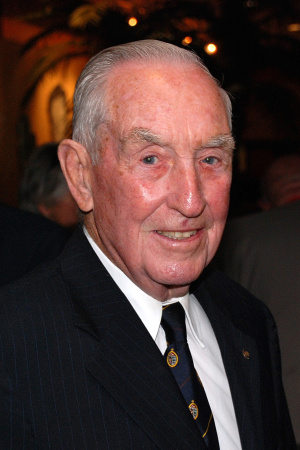 Les Wardrop: at the U of M Centennial for the Faculty of Engineering, 2007

While he was overseeing his growing engineering business, Les Wardrop returned to his rural roots and took over the family farm in Whitemouth in 1963. He spent many weekends building shelters and re-fencing the land to accommodate a commercial herd of Herefords. The initial herd of 16 young heifers grew to more than 100 head of cattle. In 1971 he and Olive moved to East Selkirk to be closer to their farm. They bought the 216 acres and house that belonged to Olive’s grandparents, Woodhaven Farm. Olive passed away in 1986 and Les continued to enjoy his rural refuge until moving to the Canoe Club for the past several years.

A number of the Canadian engineering activities and community undertakings are listed in the quotation at the beginning of this article. In addition he was:

The University of Manitoba presented him with an Honorary Degree of Doctor of Science at their spring convocation in 2006 and this was one of his proudest moments. Dr. Doug Ruth, Dean, Faculty of Engineering, said “Les Wardrop has made an enormous contribution to the advancement of science and engineering throughout the nation, and has brought distinction to himself, his profession, his community, his country and the University of Manitoba.

From Wardrop - The First Forty Years

“Les Wardrop was born in Whitemouth, Manitoba on December 18, 1915. He was educated at the University of Manitoba where he obtained Bachelor of Science degrees in Electrical Engineering (1939) and Civil Engineering (1947), following his return from overseas during the Second World War.

Convinced there was an opportunity for additional engineering consulting services throughout Canada, Les founded W. L. Wardrop & Associates in 1955. (The firm now operates under the name of Wardrop Engineering Inc.) His initial goals of expansion, diversification, technological leadership, and quality service continue to form the basis for the Company’s operation.

Throughout the years, Les played a significant role in Canadian engineering activities and participated in numerous community undertakings. He is a past president of the Canadian Council of Professional Engineers, the Association of Professional Engineers of Manitoba, the Canadian Institute of Pollution Control, and the Winnipeg Chamber of Commerce. He is also a past chairman of the Industrial Development “Board of Greater Winnipeg, and was a director of the Royal Canadian Mint and the Biomass Energy Institute.

Prior to founding the organization, Mr. Wardrop was employed by the City of Winnipeg as Engineer of Waterworks and Sewage. Mr. Wardrop retired from full-time participation in company activities on January 1, 1980, but continues as a consultant and a director.”

(The name was later changed to simply Wardrop and in January 2009, Tetra Tech acquired Wardrop.)