The second phase of development included the Long Spruce GS which was Manitoba Hydro’s fourth generating station built on the Nelson River.

The Long Spruce GS is located at a site previously known as Long Spruce Rapids (Photo 1) upstream of where Wilson Creek and Sky Pilot Creek connect with the lower Nelson River. It is approximately 13.3 mi (21 km) east of the Town of Gillam, 10.3 mi (16.5 km) downstream of the Kettle GS, and 463 mi (745 km) north of the City of Winnipeg. 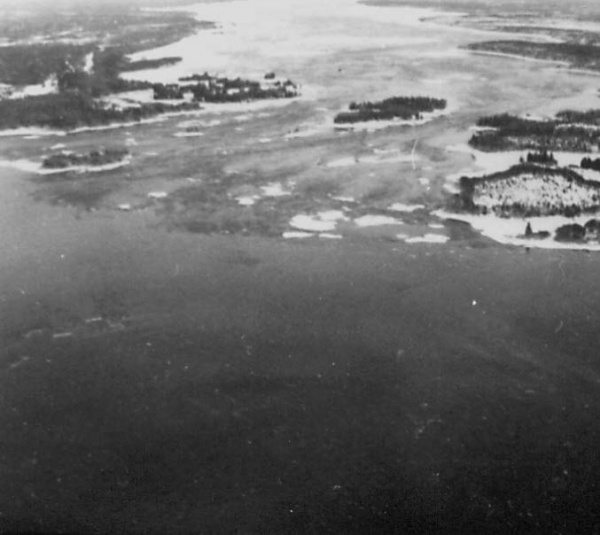 Photo 1: Long Spruce Rapids on the Nelson River prior to Construction of the Generating Station – November 1971

The station spans a total of 0.9 mi (1.4 km) across the Nelson River and consists of a close-coupled intake/powerhouse with ten units, concrete wing walls, a non-overflow concrete dam, two main earthfill dams (north and south), east and west dykes, and a six-bay gated spillway (Photo 2; Map 1). This general arrangement is similar to that of the Kettle GS and the Limestone GS. Eight miles (13 km) of dykes flank the Nelson River to reduce the extent of flooding from the project. 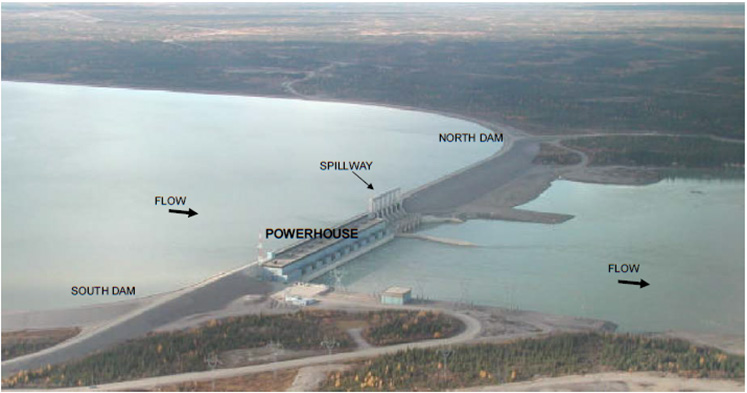 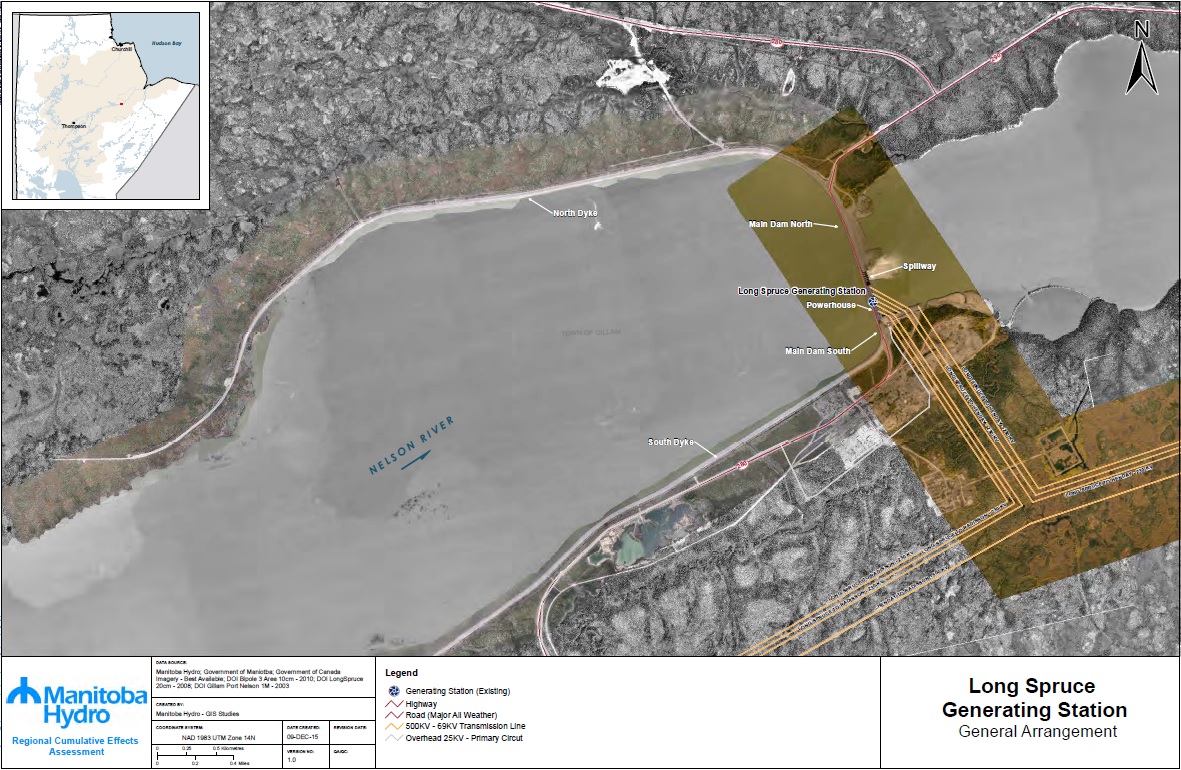 Main access to the region during construction was by the Hudson Bay Railway line which had a rail station and siding at the Town of Gillam. A new 10 mi (16 km) permanent gravel road was constructed from the Kettle GS area, as well as a temporary rail spur line from the Hudson Bay line near the Kettle GS in 1971 to the Long Spruce GS site. As was the case for the Kettle GS, there was no road connecting the Long Spruce GS to the provincial road network during construction.

Two sets of three 230 kV transmission lines were constructed from 1975 to 1980 to link the Long Spruce GS to the Radisson and Henday Converter Stations. Half of the electricity produced at the Long Spruce GS is first transmitted along the generation outlet transmission lines as alternating current to the Radisson Converter Station (L41R, L42R, L43R) where it is converted to direct current. The other half is transmitted to the Henday Converter Station (L46H, L47H, L48H) where it is also converted from alternating current to direct current. After its conversion to direct current the power is transmitted approximately 560 mi (900 km) to southern Manitoba where it is converted back to alternating current.

In 1973 the Stage I cofferdam was built which allowed the powerhouse and spillway to be constructed in the river (Photo 3). The materials for construction came from local areas, rock came from the Wilson Creek Quarry downstream from the site, granular and impervious materials came from local borrow areas outside of the forebay area. 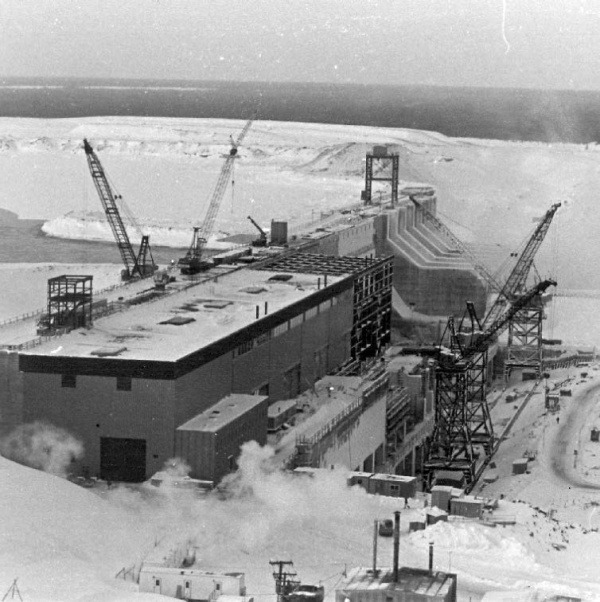 Most of the construction workforce lived in camp (Photo 4) while a small percentage lived and commuted from the Town of Gillam on a regular basis. The first of the station’s ten generating units went into service in 1977 with all being operational by 1979. 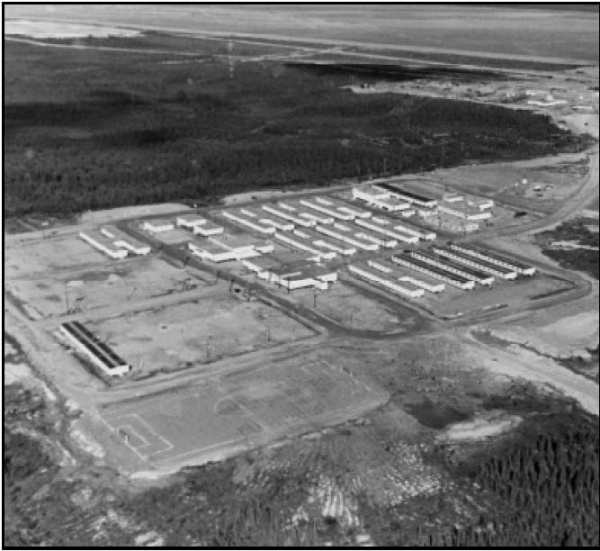 Workforce: The station has approximately 30 to 35 staff comprised of the following: operating staff, maintenance staff (electrical, mechanical, utility), support staff (administration, stores) and supervisory staff. The station is fully staffed every day between 0700h and 1800h. The operators are located on site 24 hours per day, seven days per week. Additional support and technical services are also located in the nearby Town of Gillam. The majority of staff working at the Long Spruce GS lives in the surrounding area including the communities of Gillam and Fox Lake Cree Nation (FLCN; Bird).

Water Regime: The Long Spruce GS is operated as a run-of-river generating station with flow patterns matching water releases from the Kettle GS located upstream. The Kettle GS is operated with a daily and weekly cycling pattern that allows Manitoba Hydro to match energy production to consumption patterns. For more details on the Long Spruce GS and the Kettle GS operations and their effects on the water regime, see Section 4.3.4.3.

The rail spur was removed following construction and the right-of-way was used to install a fiber optic cable to compliment the original communication system. In September 2012, three metal cylinders were removed from the Long Spruce Construction Waste Disposal Ground and disposed of at General Scrap in the City of Winnipeg. During the winter months of 2015/2016 a Phase I Environmental Site Assessment will be conducted at the former Long Spruce Construction Waste Disposal Ground. Additional environmental investigations and remediation are planned for the area.