Description: The first hydroelectric generating station built in Manitoba was the Minnedosa River Plant. The project went by several names as discussed below. It was located on the Minnedosa River (see explanation about the name change to Little Saskatchewan River) about 1 mile upstream from the confluence with Assiniboine River, about 9 miles west of Brandon, Manitoba. 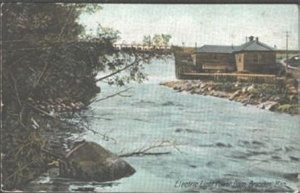 Where: Southwestern Manitoba – 10 miles west of the City of Brandon. (see Photograph 2 and 3 - take note of the date!).

Who: The plant was built and operated by the Brandon Electric Light Company.[2] The consulting engineers and contractor are unknown. History points to a trio of men who are identified as the enterprising parties behind the venture: Judge Walker of Winnipeg, and Brandon’s George Patterson and E.L. Christie. They formed a company called the Brandon Electric Light Company Ltd. The company first built a steam generating station in the City of Brandon in 1889 to supply residents with electricity for steam and light. The history of the company is unknown however the company would be later taken over by Canada Gas & Electric Corporation of Brandon in 1921. The history of the Canada Gas & Electric Corporation is very interesting in the electrical and transportation industry and is partly told by Robert Booth[3].

Why: To reduce operating costs and provide summer support to the existing gas electricity supply system in the City of Brandon.

How: The power was developed by combining the available summer flows along the Minnedosa River and the hydraulic head at the site to produce power during the summer time. 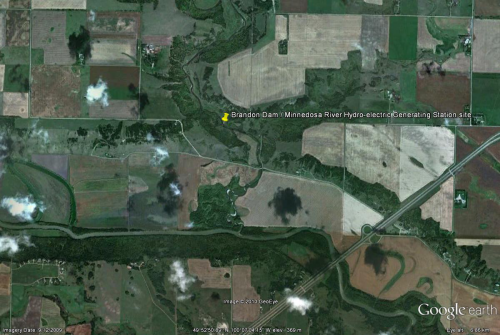 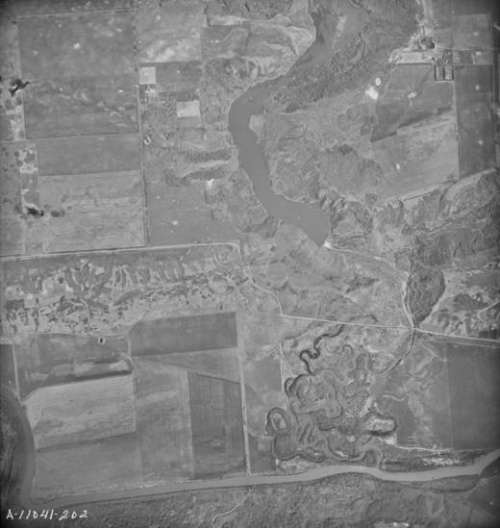 What is in a name?

It is interesting in researching this site how many different names are used in various records. Would you believe that the 10 Mile Dam, Dam on the Little Saskatchewan River, Brandon Power Plant, and Minnedosa River Plant all refer to the same development. The name ’10 Mile Dam’ referred to the fact that the dam was 10 miles from Brandon circa 1900. Manitoba Hydro’s website refers to the site as it was originally called, ‘the Minnedosa River Plant’. The name of the river was adopted in 1911 by the Geographic Board of Canada as the Minnedosa River but was restored to the original name of 'The Little Saskatchewan River' in 1978. Some early settlers to the area arrived when the river was in flood and thought it was the Saskatchewan River[5]. To add more confusion, a hydroelectric generating station built in the Manitoba town of Minnedosa, which is located on the upper part of the same river was also referred to as the Minnedosa Plant without the word ‘river’. Good luck with all of this!

The company that was responsible for the development too had many names. ‘Brandon Gas and Electric Company’ (need more help here!).

The plant is connected with many engineering firsts in Manitoba.

The project was the first hydroelectric generating station in Manitoba, preceding the Pinawa Generating Station by 6 years which provided power to the City of Winnipeg in 1906. The new hydroelectric technology was just beginning to be developed in Canada (see history of the development of hydroelectricity in Canada (Hydropower in Canada Past Present and Future 2008 by Canadian Hydropower Association)). So how did the concept get to Brandon? The group of entrepreneurs noted above likely had to hire some outside engineering experience. The engineers involved in the project are not known. It is also not known how the site was selected or how the concept was developed. The Winnipeg Free Press 100 Year Pictorial History of Winnipeg (1973) reported that ‘The earliest scheme for producing hydroelectric power in Winnipeg dates back to 1888 when supposedly competent engineers suggested using the rapids on the Assiniboine River near the St. James Bridge. If necessary, extra water could be brought by canal from Lake Manitoba and if more was required, the Saskatchewan River would be diverted into the lake. The scheme was kicked around for nearly 15 years, but was eventually given up.’ So it is logical that if the ‘supposedly competent engineers’ were around in Winnipeg it is likely that the same discussion eventually also took place in Brandon. Although it is not clear how the entrepreneurs brought in the technology, it was not as a result of any government initiative as it was not until 1913 when the federal government prepared an inventory of the many natural resources of Canada including the water power potential within the province. That would have been well after the Minnedosa River Plant had been operating for over 10 years.

The project was also the first integration of hydroelectric and steam power into a composite system in Manitoba.

It was the first dam to be built on a river in Manitoba (unless someone knows of another dam built prior to this undertaking?). The project also required the first transmission line of any significant length.

The project also attracted the interest of one of the most influential persons in the electricity industry at the time, Mr. Samuel Insul from Chicago. David S.G. Ross, P.Eng. wrote[6] in 1963-64 about how a Mr. L. E. Meyers, an engineer reporting to Mr. Sanuel Insul was asked to investigate the potential for hydropower in the province of Manitoba. Mr. Meyers was rebuffed in his attempt to gather critical project information. It was not clear why his efforts were rebuffed but that connects this story with another interesting story about the emergence of electrical utilities in America and the Seeds of Regulation.[7]

The Minnedosa River obtains a good portion of its supply from the Riding Mountain National Park near Lake Audy. The river flows off the Manitoba Escarpment in a southeasterly direction to the town of Minnedosa before the river changes direction and flows in a southwesterly direction to the Assiniboine River about eight miles west of the City of Brandon. The main notable tributary is the Rolling River upstream of Minnedosa. (need water shed map)

The Minnedosa River drops almost 500 ft between Minnedosa and the junction with the Assiniboine River. The watershed covers an area of 1,640 square miles of mostly hilly and undulated lands. The soil is principally sandy clay with many boulders. The soil generally overlies a stratum of gravel and at a depth of about five feet, blue clay is encountered in most sections. The river is between 50 to 90 feet wide and flows over a composite bed of fine gravel and sand and in some localities a thick covering of large boulders. The upper basin is 45 miles wide and the overall length of the river was estimated at 125 miles, 51 miles between Minnedosa and the Assiniboine River. A 32 year precipitation record for the town of Minnedosa indicated the mean annual precipitation was 18 inches (1913 Manitoba Hydrometric Survey).

The Brandon Power Plant was built at site A shown on the attached profile prepared as part of the water power reconnaissance work undertaken between 1911 and 1916 as part of the above work. The head that was developed at the site was 30 ft. 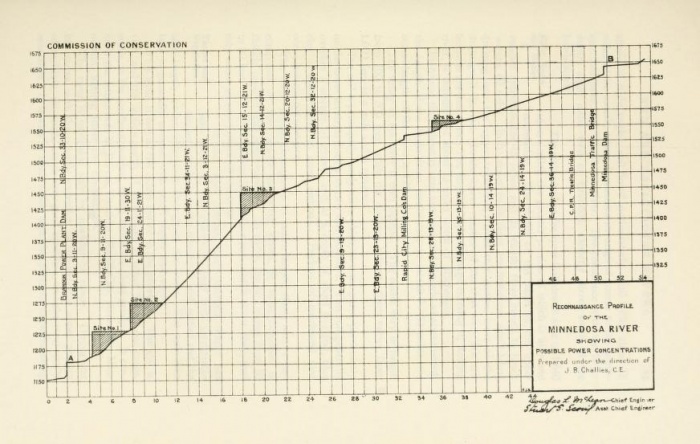 “The site was developed by the construction of a log dam filled with boulders and gravel, with a spillway the width of a good suburban lot which with stop logs increased the height of the water drop to thirty feet. Two five hundred horse power turbines spun the water into electrical energy.”[6] The plant was only able to operate from April to November. [It is not clear if the reason was that there was generally only flow during that period or if the challenges with ice processes from steep rivers were not able to be managed at that time.]

A more technical description was found in Water-powers of Manitoba, Saskatchewan and Alberta (1916) [8] as follows: “A timber dam, 260 feet long was filled with boulders and gravel. The Power-house contained two units, each of which consists of a 54-inch wheel geared to a 300-k.w. generator. The electricity is generated at 60 cycles, three phase, 1,100 volts, and stepped up to 11,800 volts by six 100-k.w. transformers.”

There was only a reliable source of water from April to November so the plant was not operated during the winter months. The system was connected to the steam plant in the centre of the City of Brandon which provided the electricity for the remaining part of the year. The maximum demand not including a street railway load of two 300-k.w. rotary converters during the summer was 600 k.w. and 1,100 k.w. in winter. Before the street railway commenced operations, the hydroelectric plant carried all the load from April 1st to September 1st, and part of it from then to December, closing down in winter.

A nine mile 11 kV transmission line of No. 6 hard-drawn copper wire supported by wooden poles carried the energy to the City of Brandon where it was received at the company’s steam station and stepped down to 2,300 volts by a set of transformers similar to that at the power-house.

Although not much is known about how the plant was decommissioned, other than it was in 1924, what we do know is that on May 4, 1948 an upstream dam in the town of Minnedosa failed due to erosion. That failure would of surely resulting in a surge of water that may be reason for the lack of physical evidence at the site today. 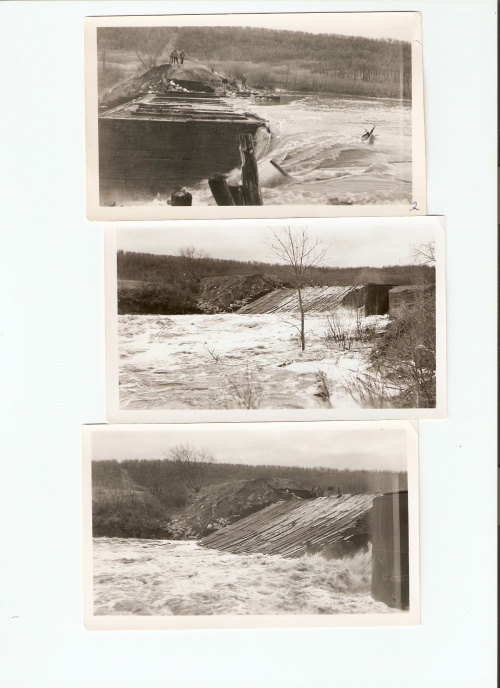 One of the main values of keeping old photographs is that they preserve records of things that have disappeared. The 1947 photo from Photograph No. 3 shows the Ten Mile Dam on what is now called the Little Saskatchewan River just above its junction with the eastward-flowing Assiniboine River. The dam backed up a reservoir in the Little Saskatchewan Valley, but it emptied when the dam was washed away in 1948 as shown in Photograph No. 2.

What is there now?

The series of events that has occurred at the Minnedosa River Hydro Power site has peaked the interest of the APEGM Heritage committee, so much so that a 'road trip' was undertaken in the fall of 2012 to see first hand what remains. A selection of photographs and a brief narrated video were collected by the historians. Check out some of the collection that will be posted in the near future. Members of the APEGM Heritage Committee - October 2012 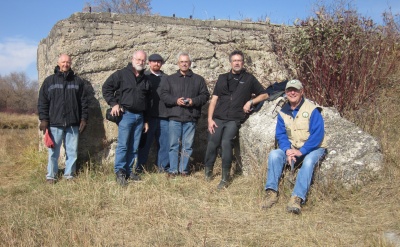 2. Water-Powers of Manitoba, Saskatchewan and Alberta – by Leo G. Denis and J. B. Challies, Commission of Conservation of Canada, published in 1916 (http://archive.org/stream/waterpowersofman00canarich#page/n3/mode/2up)).

4. This information comes from an online reference maintained by the University of Brandon. The late Dr. John Welsted (Department of Geography, Brandon University) assembled a collection of remotely sensed images that depict the geography of Manitoba. About 550 of these images have been selected for presentation in an electronic book (e-book) titled Manitoba from the Air: A Geographical Interpretation. http://mbair.brandonu.ca/figure/display/16.25