The Nelson River HVDC Transmission Lines, also known as Bipole's I & II, are a set of 895 km long double circuit transmission lines running parallel to each other and connect the Town of Gillam in northern Manitoba to the City of Winnipeg in the south. The two combined have a total of 3,918 guyed towers and 96 self-supporting angle towers. Foundation conditions for the towers varied significantly along the route alignment for the transmission lines. Examples of the foundation conditions encountered included bedrock, deep muskeg, discontinuous permafrost, soft clays, boulder tills, and ground subject to seasonal frost heaving. The greatest challenges with respect to the design of the tower foundations involved the discontinuous permafrost and adfreeze forces. 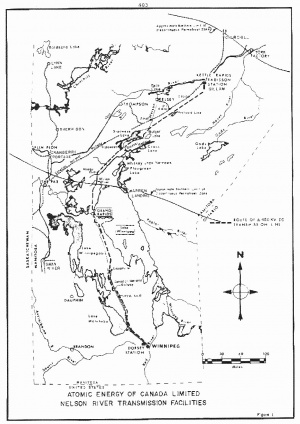 The southern portion of the transmission corridor is 530 km in length and runs through the Interlake region of Manitoba between Lake Winnipeg, Lake Manitoba and Lake Winnipegosis. The soil conditions in this area predominantly consists of flat level terrain with relatively few swampy areas. The limestone bedrock beneath the soils typically varies from being at the surface to in excess of 15 m down. The predominant soil in the area is glacial till with boulders, silts, and clays. Some sands and artesian flow conditions occur.

The northern portion of the transmission corridor is 365 km in length and runs through the Canadian shield (Precambrian bedrock). This terrain is characterized by rugged granite rock, deep muskeg, and extensive peat lands. The soils vary from hard glacial till to very soft silty clays and intermittent submerged sand deposits. This section of the transmission corridor lies within an intermittent permafrost zone, which is characterized by sporadic permafrost in the south near the north end of Lake Winnipeg to widespread permafrost in the north near Kettle Rapids and the Town of Gillam. The ground conditions can vary so significantly that within a single tower it is not unusual to have four anchors of a guyed tower within four different sub-surface conditions.

The relative size and importance of the HVDC project justified a meaningful amount of research going into its design, principally related to permafrost and adfreeze forces.

Extensive laboratory testing, analytical studies, and literature reviews were carried out to obtain basic data on the engineering properties of thawed permafrost soils, rates of regression of the permafrost table, and the nature and extent of settlements resulting from thawing. Close liaison was maintained with the National Research Council of Canada and the U. S. Army Material Command’s Cold Regions Research and Engineering Laboratory. Pioneering work from the U.S.S.R. was also used.

Part of the research and design process included an extensive anchor testing program which was carried out by Manitoba Hydro at several sites representing various soil conditions. The anchors tested included grouted, belled, screw-in, plate, and Malone types. On behalf of Atomic Energy of Canada, Teshmont Consultants conducted additional anchor testing programs including tests on overburden drilled anchors and driven pile anchors. In addition they conducted a series of detailed field tests to determine the behavior of straight shaft and belled cast-in-place concrete anchors in thawed permafrost affected ground. In total twenty anchors were installed in the permafrost and the ground was thawed by means of rod type electric heaters. The anchors were then tested to failure. The behavior of the anchors under anticipated thawing conditions was predicted to within an acceptable degree of accuracy. 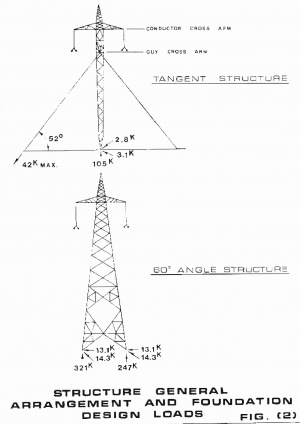 Permafrost can occur in areas as small as a few square meters to as large as several acres. The depth of the permafrost varied from less than 3 m deep to more than 30 m, in no particular set pattern. The frozen soils contained within permafrost are typically silty clays containing ice inclusions and lenses up to 300 mm thick. Ground temperature in the upper layers is -1C to 0C. Studies indicated the impacted areas will not remain frozen. In the frozen state the soils have substantial pullout resistance. However, in the thawed state the soil is transformed into a fluid like structure with a drastic reduction in strength, and consolidation results in large settlements.

The rate of regression of the permafrost table was estimated based on one dimensional heat transfer. Five idealized soil profiles were analyzed.

Frost heave and adfreeze forces were computed by an empirical approach described by N. A. Tsytovich with field and laboratory testing done by Dalmatov and Vyalov. The average force of 96 kPa over 1.8 m was compared to observations by Crory in Alaska and the U.S.S.R. permafrost design manual. Reducing the forces by granular backfill or providing a slip surface was rejected due to high water tables and maintenance difficulty.

The 150 mm overburden drilled type of anchor was chosen as the most versatile and economic system. The maximum drilling depth was initially 15 m however, in soft clays and permafrost 400–450 mm diameter anchors were installed utilized (1969). This system was slow and costly and drilling equipment was improved to advance the 150mm system to 24.4m.

Approximately 8000 anchors were tested and 150 required corrective measures consisting of an anchor of greater length or a second anchor with a yolk.

In the 1970’s ID Engineering Company, one of the founding members of Teshmont, supported research into adfreeze forces at the University of Manitoba. A 2.4 m steel tank was fitting with refrigeration equipment to freeze soils with embedded structural members and measure forces.

Shortly after construction, a number of mast support quadruped legs were bent and the top cap was torn at the corner weld by the block of frozen soil rising within the sloping legs. The soil was replaced by a Styrofoam block.

Also, within a few years a number of spread footings experienced excessive settlement that was corrected during maintenance.

The Nelson River Transmission Lines are an innovative, successful facility that brings 75% of Manitoba power to southern Manitoba and for export.