Summary of the Project

Description: When a vehicle collides with a road-side pole (utility, signal, etc.) the Safety-T-Base coupler allows the pole to break away from its base. After a collision, the couplers are easily removed and replaced with a new coupler set. The undamaged pole can then be quickly repositioned and reactivated with nominal effort. 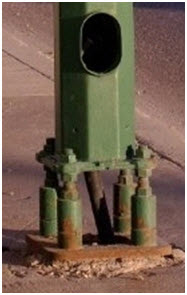 Where: Developed at the University of Manitoba, Faculty of Engineering, Department of Mechanical Engineering, Winnipeg Manitoba. The invention and development was by Dr. John Shewchuk, P.Eng., assisted by Professor W.D. Alexander. Why: There was a need for road-side poles to be supported for vertical loads and moment while not resisting horizontal loads when stuck by vehicles, thereby minimizing death and injury often common to automobile accidents.

How: The coupler uses vertical extensions to the anchor bolts in the pole foundation. The extensions are fabricated form cast iron with a short portion of reduced cross-section in the form of a notch. Cast iron is relatively stronger in compression and tension but much weaker in shear. As such the coupler resists the normal operating loading but shears off when a relatively low side impact is applied by a vehicle.

Apparently the system was initially full scale tested on the grounds of the University of Manitoba by Dr. Shewchuk and Dr. Jack Cahoon using an operational vehicle. In 1975, the City of Winnipeg adopted Safe-T-Base couplings for utility poles on its regional streets which carry 80% of the traffic in the city. In the previous three years, there had been an average of 1100 accidents, four fatalities and 240 injuries per year, involving utility poles. By 1991, this breakaway base had been installed on 100% of pedestrian corridor poles, 85% of traffic signal poles and more than 50% of street lighting poles on regional streets. There were no fatalities from collisions involving these installed breakaway-type bases. No fatal collisions involving breakaway-type bases on street lighting poles, traffic signal poles or pedestrian corridor poles occurred

The system was tested later by the Texas Transportation Institute, Texas A&M Research Foundation, Teas A&M University, College Station, Texas, in 1980. The institute issued a report “Vehicular Crash Test of Safe-T-Base Couplings, Report 4351-1, Prepared for Manitoba Safe-T-Base”. A full-scale impact test was performed using an instrumented 2300 pound vehicle on a 50 foot pole with a 10 foot mast arm. The change in the vehicle’s momentum was well below the allowable limit required by the American Association of State Highway and Transportation Officials specification. Following the test the US Department of Transportation’s Federal Highway Administration authorized use of the coupler on Federal-aid highway projects.

Influence: The coupler has saved, and continues to save, lives, insurance claim costs, and public money all over North America for nearly 40 years