Lake Winnipeg Regulation (LWR) was announced by the Government of Manitoba in 1970 and developed by Manitoba Hydro to achieve two key objectives: to reduce shoreline flooding on Lake Winnipeg, and to support hydroelectric generation to meet growing demand in Manitoba. The project is a network of channels and structures that are used to control the outflow of water from the lake and allow higher outflow during flood conditions. During flood conditions it increases the outflow capability of the lake by approximately 50% more than would otherwise occur naturally. LWR went into operation in 1976.

The Jenpeg Generating Station (GS) is located on the West Channel of the upper Nelson River where the channel flows into Cross Lake. It is approximately 12 mi (19 km) southwest of the community of Cross Lake and 325 mi (525 km) north of the City of Winnipeg. 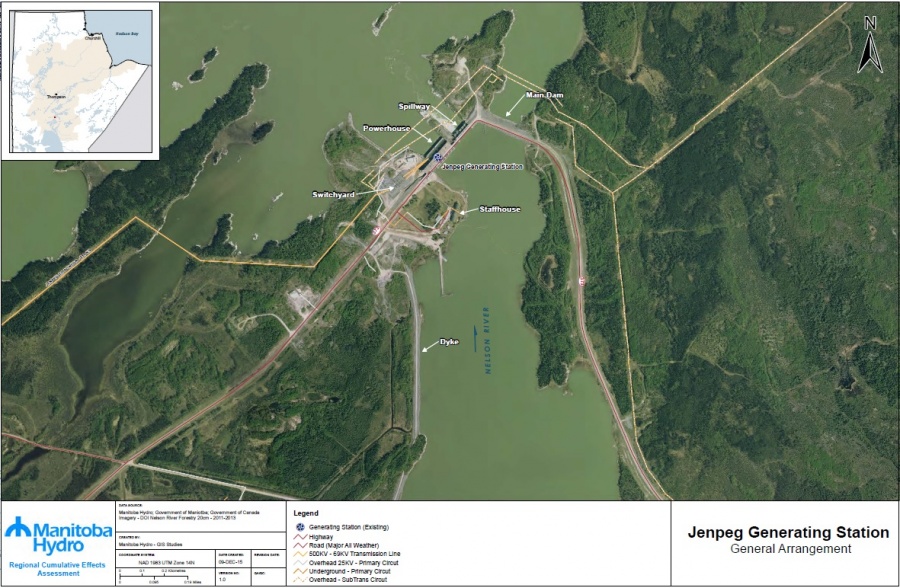 The Jenpeg GS is one of the major components of LWR and, being located on the West Channel, controls most of the outflow from Lake Winnipeg (the East Channel of the upper Nelson River remains unregulated). Originally envisioned to be exclusively a control structure only, a decision was made during the final planning of LWR to add generating units at the structure. Descriptions of LWR and associated supporting infrastructure are provided in Lake Winnipeg Regulation.

The station spans a total of 0.4 mi (0.6 km) across the West Channel and consists of a close-coupled intake/powerhouse with six units, an earthfill dam, and a five-bay gated spillway (Photo 1; Map 1). 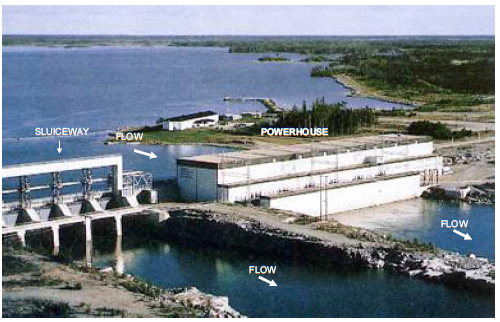 The Jenpeg GS was the first generating station in North America to use bulb-type turbine generators. This design reduces the depth of excavation required into the underlying bedrock. See Figure 1 below for a cross sectional view through the powerhouse.

The main dam extends across the west channel of the Nelson River, diverting water to the Jenpeg powerhouse and a spillway. 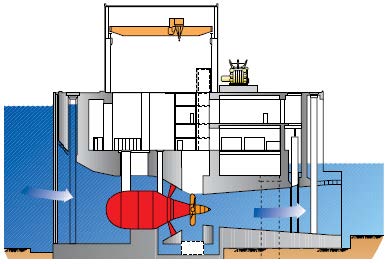 Main access to the site was achieved by extending PR 373 to the Jenpeg site with construction beginning in 1972. At a point on the Ponton-Thompson road (now PTH 6) approximately two miles (3.2 km) southwest of Pipun, a forestry road to Sipiwesk Lake was in place. The first 15 mi (24.1 km) of this road was up-graded and a new permanent gravel road was extended south-easterly for approximately 35 mi (56 km) to the Jenpeg site. The road was designed to carry construction traffic including the heavy loads associated with the turbine and generator components. In addition there was a 2,500 ft (762 m) long paved airstrip constructed during the project for use as required.

Excavation of the spillway and powerhouse channels through solid granite bedrock in the dry began in 1972. These channels were excavated leaving a portion of the rock along the riverbank as a plug to prevent the river from flowing in. The rock plug was later removed and the river was diverted into the powerhouse and spillway channels. The first concrete was poured in 1973 and all six of the units were in service in 1979 (Photo 2).

Most of the rock and impervious construction materials came from local borrow areas, while the granular materials were hauled from the Whiskey Jack deposit approximately 8 mi (13 km) east of the construction site. The construction workforce lived in camp for several weeks at a time and traveled to their homes during their days off. 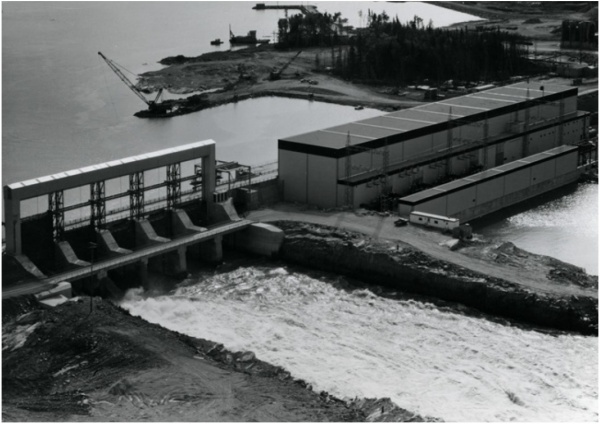 A temporary construction camp and work areas were established near the project site. Construction power was provided by pre-building the 230 kV transmission line (J30P) from the Ponton Substation to the Jenpeg Switching Station that would ultimately be used to transmit power to the transmission grid once the project was completed.

The Cross Lake Weir was developed to lessen the effects of LWR on Cross Lake by increasing the average water level and reducing the range of water levels. Construction of the weir was completed in 1991 and modified the lake’s main outlet channels by filling in a portion of the Centre Channel and excavating a portion of the East Channel. Also see Lake Winnipeg Regulation.

Access: The Jenpeg GS is accessible by the Provincial Road network via PR 373 as well as by air. Provincial Road 373 crosses the powerhouse and spillway decks and provides access to previously isolated northern communities. The airstrip built during construction has subsequently been extended to 3,800 ft (1,158 m) and continues to be used as part of the access options for the site.

The Kiskitto Dyke line is accessed by a gated gravel road that branches off from PR 373 and connects to a causeway following along the dyke line.

Workforce: The station has approximately 46 staff comprised of the following: operating staff, maintenance staff (electrical, mechanical, utility), support staff (administration, stores) and supervisory staff. The workers arrive at the Jenpeg GS from various locations within the province. The workforce is split into two shifts (23 persons per shift) who work an eight days on/six days off schedule, allowing the station to be fully staffed every day from 0700h to 1820h. After hours, the System Control Centre located in the City of Winnipeg, monitors the alarms within the station and call out operations staff residing in the staffhouse to investigate any anomalies.

Accommodation: The workers stay on site in a 54 person staffhouse, completed in 1984 and located upstream of the station (Photo 3). 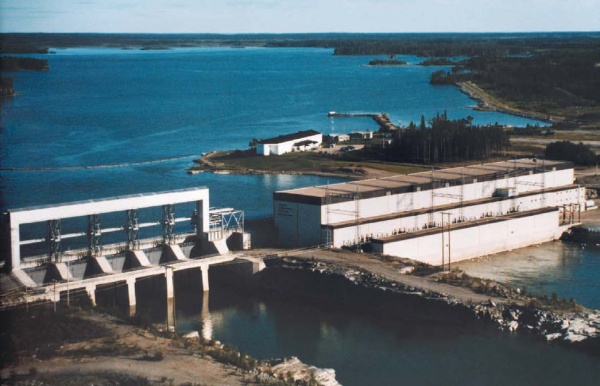 Public Safety: The Jenpeg GS has a portage around the site and the following public safety features:

Water Regime: The Jenpeg GS functions as both a generating station and a control structure. The station is operated primarily to schedule Lake Winnipeg outflows and generation along the lower Nelson River with seasonal load requirements. The Jenpeg GS produces energy using the outflow targets set by LWR.

The Jenpeg GS employs an ice boom (Photo 4) upstream of the station that is used in conjunction with an Ice Stabilization Program to ensure proper ice formation and prevent frazil ice accumulation on the unit intakes during freeze up. For further information on LWR operations, the Jenpeg GS operations, and their effects on the water regime, see Water Regime, Section 4.3.2. 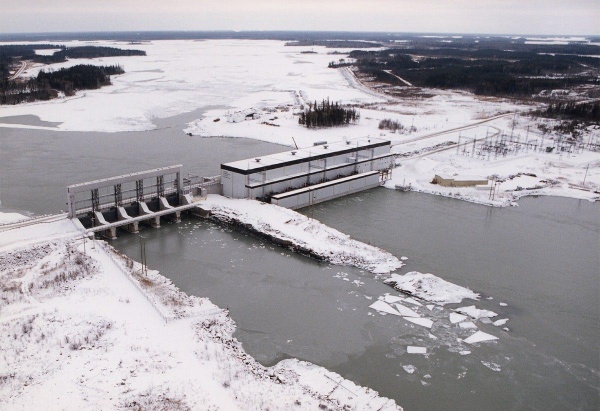 In 1993 ten areas were investigated by Manitoba Hydro for potential remediation activities, including former storage areas, waste disposal grounds, and temporary sites . Several areas were remediated in 2000. In 2001 Manitoba Conservation inspected the ten sites and indicated that they could not find evidence of any outstanding concerns, and that remediation or further testing of these areas was not required at this time.

In 2004 the former 4-66 kV Substation and 4-12kV Setup Station was investigated and subsequently salvaged in 2006. In November 2010 the station areas underwent remediation, with 77.4 tonnes of impacted soil excavated and removed from the Jenpeg area. Groundwater wells in this area were decommissioned in 2012. Manitoba Hydro is completing subsurface investigations to decommission the current waste disposal ground, and a waste transfer station will operate in its place in the future.