Lake Winnipeg Regulation (LWR) was announced by the Government of Manitoba in 1970 and developed by Manitoba Hydro to achieve two key objectives: to reduce shoreline flooding on Lake Winnipeg, and to support hydroelectricity generation to meet growing demand in Manitoba. The project is a network of channels and structures that are used to control the outflow of water from the lake and allow higher outflow during flood conditions. During flood conditions it increases the outflow capability of the lake by approximate 50% than would otherwise occur naturally. LWR went into operation in 1976.

The components of LWR are located between the outlet of Lake Winnipeg and the Jenpeg Generating Station (GS) and are shown on Map 1 (also see Map 1.2.3-1 in Chapter 1.2, Overview of the Phase I and Phase II Reports). 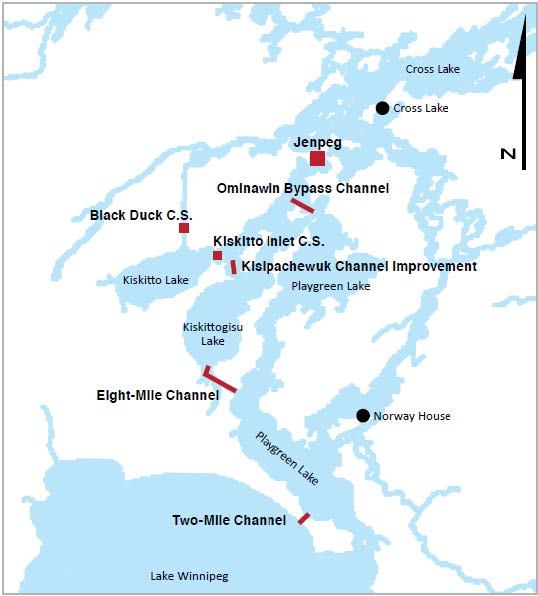 Project data of the main channels constructed to improve the outflow from Lake Winnipeg is presented in Table 1 below.

Two-Mile Channel connects Lake Winnipeg and Playgreen Lake to provide a second outlet for Lake Winnipeg water. The channel is about two miles (3.2 km) long, 600–700 ft (183–213 m) wide, and about 30 ft (9 m) deep (Photo 1). The natural outlet for Lake Winnipeg is located east at Warren Landing. This outlet has a few major islands with one wider channel, and then transitions to one channel with numerous vegetated shallows, rock outcrops, and smaller islands. These features impede the flow of water during the open water season, with even more significant flow constrictions in winter as ice grows. 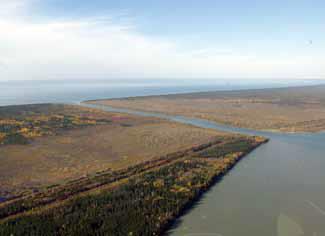 Eight-Mile Channel provides a direct flow of water from Playgreen Lake to Kiskittogisu Lake, allowing water to flow more directly from Lake Winnipeg to the Nelson River. It ranges in width from approximately 700 ft to 1,200 ft (213–366 m) and is approximately 20 ft (6 m) in depth and is shown in Photo 2. This channel creates an alternative route that bypasses a relatively narrow portion of Playgreen Lake and an even narrower portion at the north end of the lake called Whiskey Jack Narrows. 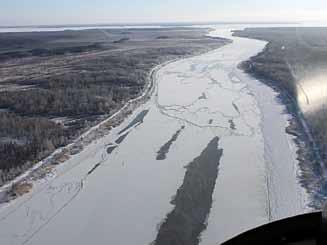 The Ominawin Bypass Channel is located at the north end of Kiskittogisu Lake and allows water flow to bypass the natural restrictions of the Ominawin Channel. The bypass channel is approximately 1,400 ft (427 m) wide, approximately 20 ft (6 m) deep, and approximately 2.1 mi (3.4 km) long and is shown in Photo 3. In addition the channel has a centre division (a rockfill groin) designed to reduce ice thickness. 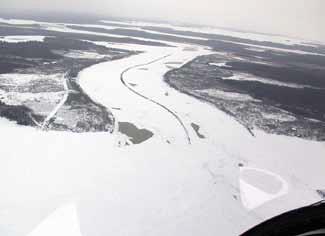 The Kisipachewuk Channel Improvement was constructed to increase water flows through the outlet channel from Kiskittogisu Lake into the Nelson River. The channel improvement is an excavation of the existing river bed over a length of approximately 260 ft (80 m) and width of 200 ft (60 m) and is shown in Photo 4. 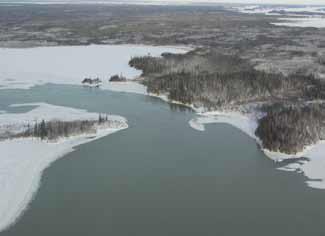 The Jenpeg GS is located approximately 62 mi (100 km) north of Lake Winnipeg on the upper portion of the Nelson River. The Jenpeg GS controls most of the outflow of water from Lake Winnipeg for flood protection on Lake Winnipeg and for power generation along the Nelson River. Originally envisioned to be exclusively a control structure, a later decision was made to add generating units at the structure. A view of the station from the forebay can be seen in Photo 5. Descriptions of the Jenpeg GS, associated supporting infrastructure, and transmission facilities are provided in Jenpeg Generating Station. 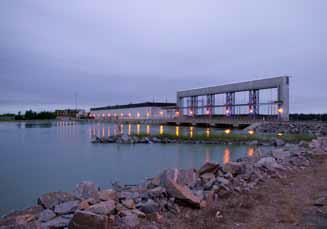 The Kiskitto Lake Inlet Control Structure regulates water flow into Kiskitto Lake so that Kiskitto Lake water levels can be maintained within their natural range. The impoundment of water from the construction of the Jenpeg GS required the development of works to prevent flooding of Kiskitto Lake. While a dam and dyke prevent this, some inflow is required to control the water level. This is achieved with the use of a culvert which regulates flows by using a vertical lift gate. The original gated steel culvert was replaced in 2003/2004 with a concrete box culvert (Photo 6). 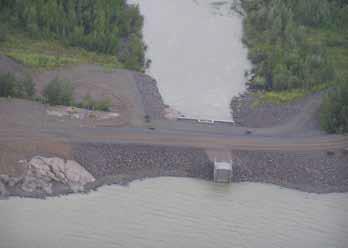 The Kiskitto Main Dam is approximately 2,000 ft (600 m) in length, with a maximum height of 49 ft (15 m) from its base. There are also 16 separate dykes with a combined length of 8.75 mi (14 km). These dykes protect Kiskitto Lake and the surrounding area from the higher water levels of the Nelson River’s west channel. 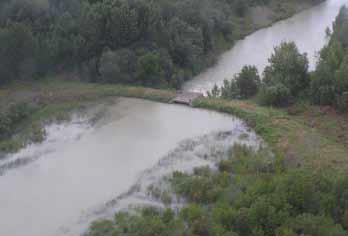 The Stan Creek Diversion Channel routes naturally occurring local drainage into Kiskitto Lake which was blocked from flowing into the Nelson River by the construction of containment dykes. The channel is approximately 10 ft (3 m) wide at its base, is on average 9 ft (2.7 m) deep, and is approximately 5,000 ft (1,500 m) in length.

The Cross Lake Weir was developed to lessen the effects of LWR on Cross Lake by increasing the average water level and reducing the range of water levels. Construction of the weir was completed in 1991 and modified the lake’s main outlet channels by filling in a portion of the Centre Channel and excavating a portion of the East Channel (Figure 1).

Construction activities were sufficiently complete in 1976 to permit regulation of Lake Winnipeg for the first time.

An access road was constructed from the Jenpeg area along the Kiskitto Dyke line to the various construction sites in 1972. Construction power was provided by portable generators. Construction camps and work areas were set up near the work sites.

Water Regime: As described above, LWR was developed to achieve two main purposes: flood reduction around Lake Winnipeg, and energy production on the Nelson River. LWR reduces peak water levels on Lake Winnipeg by increasing discharge capacity during floods. LWR also provides greater flow reliability during the winter and enhances the availability and timing of water for hydroelectric production along the lower Nelson River. The Jenpeg GS is operated primarily as a control structure as part of LWR. For more details on LWR operations, the Jenpeg GS operations, and their effects on the water regime, see Water Regime, Section 4.3.2.

In 2007, an environmental drilling investigation was commissioned which resulted in contamination being discovered on the west and east sides of the channel outlet. These impacts were delineated during a 2009 investigation and a Remedial Action Plan was developed. The plan was implemented between 2011 and 2015. Approximately 6,600 m3 of contaminated soils were excavated and placed into bioremediation cells for treatment. Approximately 180 m3 of concrete and metal debris was removed from the site. Planned future activities include a geophysical magnetic survey, additional soil remediation activities, and biennial soil and groundwater sampling.

Historical construction activities at Eight-Mile Channel resulted in soil and groundwater contamination along with the presence of construction debris at the former construction sites. Manitoba Hydro has been actively investigating and remediating the Eight-Mile Channel former construction sites since 2002. Intensive surficial construction debris clean-ups were undertaken in 2004 and 2005, as well as electromagnetic surveys at 14 sites along the north and south sides of the channel. In 2006 and 2007, environmental drilling investigations were commissioned which resulted in contamination being discovered on the north side of the channel. During the 2006 investigation, groundwater wells were installed at five sites and have been sampled regularly since 2006. In 2007 a Remedial Action Plan was developed and implemented in 2008. These activities included the construction of a soil treatment facility to receive approximately 6000 m3 of impacted soils from the Eight-Mile Channel area. Soil within the facility has been aerated on a regular basis since 2008 to hasten the remediation process. Manitoba Hydro has been conducting groundwater and soil sampling on a regular basis since 2006 and 2008, respectively.

In 2015, additional soil contamination was discovered at one site along the north channel. This area will be investigated during the 2016 season. Planned future activities also include groundwater sampling, aeration of soil within the soil treatment facility and eventual decommissioning of the facility, and removal of the limited remaining construction debris.

Manitoba Hydro initiated a ground and air search for construction debris in 2002. In 2003, stacked pipes were removed from the site. Additional environmental investigations are planned for the area.