The Limestone GS is located at a site previously known as Limestone Rapids or Upper Limestone Rapids (Photo 1), upstream of where the Limestone River empties into the Nelson River. It is approximately 14 mi (23 km) immediately downstream of the Long Spruce GS, 34 mi (55 km) from the Town of Gillam and 466 mi (750 km) north of the City of Winnipeg. 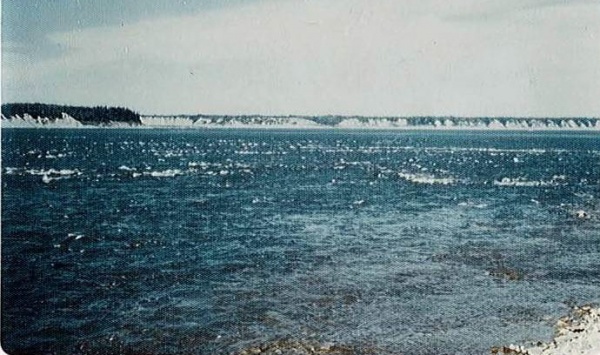 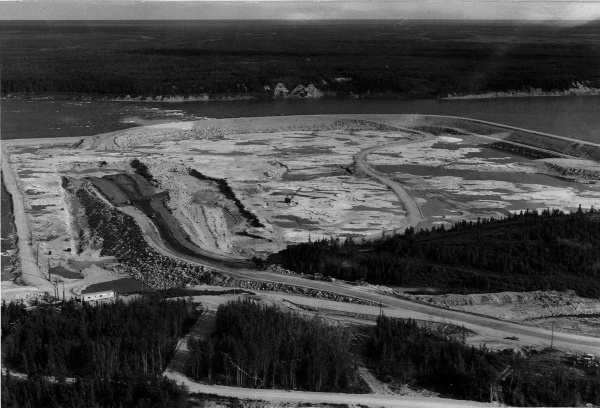 In August 1985 construction of the Limestone GS was resumed by Manitoba Hydro as a result of the approval by the National Energy Board for an export sale for up to 500 MW of firm power from 1993 to 2005 to the Northern States Power Company of Minneapolis, Minnesota. As a result of the initial construction activities between 1976 and 1978, the project was able to re-commence development work directly on the principal structures as much of the supporting infrastructure required for construction activities was already in place.

A new rail spur extending the Henday rail spur was added to the Limestone GS work area. There was an airstrip in the community of Bird for some portions of the project but it was not used for construction. The temporary construction camp, work areas, a temporary townsite named Sundance, and the opening of the Limestone River Quarry as a source of rock fill for the Stage I cofferdam were re-established. The entire construction workforce either lived in camp or in the Sundance townsite. Those living in camp stayed for several weeks at a time and travelled to their homes during their days off. Solid waste was disposed of at a local solid waste disposal site and wastewater was treated at a local lagoon.

The Stage I cofferdam constructed in 1978 was originally designed to an elevation of 70.0 m above sea level. During the period from 1979 to 1985 this cofferdam was overtopped on two occasions due to high water levels caused by ice jams (Photo 3). This new information led to the requirement to increase the height of the Stage I cofferdam to a nominal elevation of 73.0 m prior to re-commencing construction (Figure 1). The materials for construction came from local areas, rock came from the Limestone River Quarry and the site excavations, granular and impervious materials came from local borrow areas. 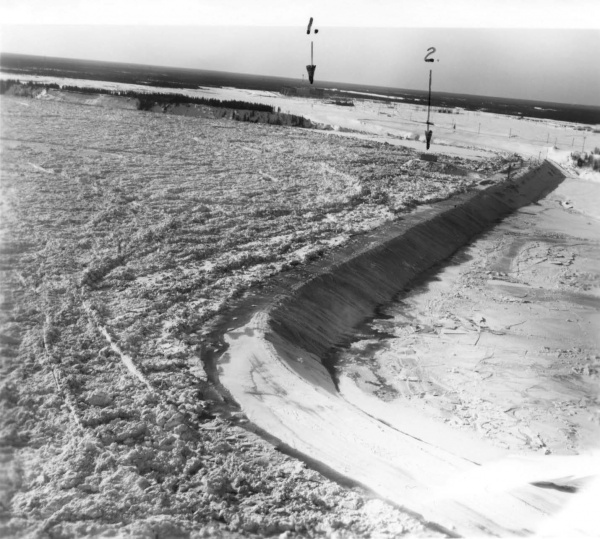 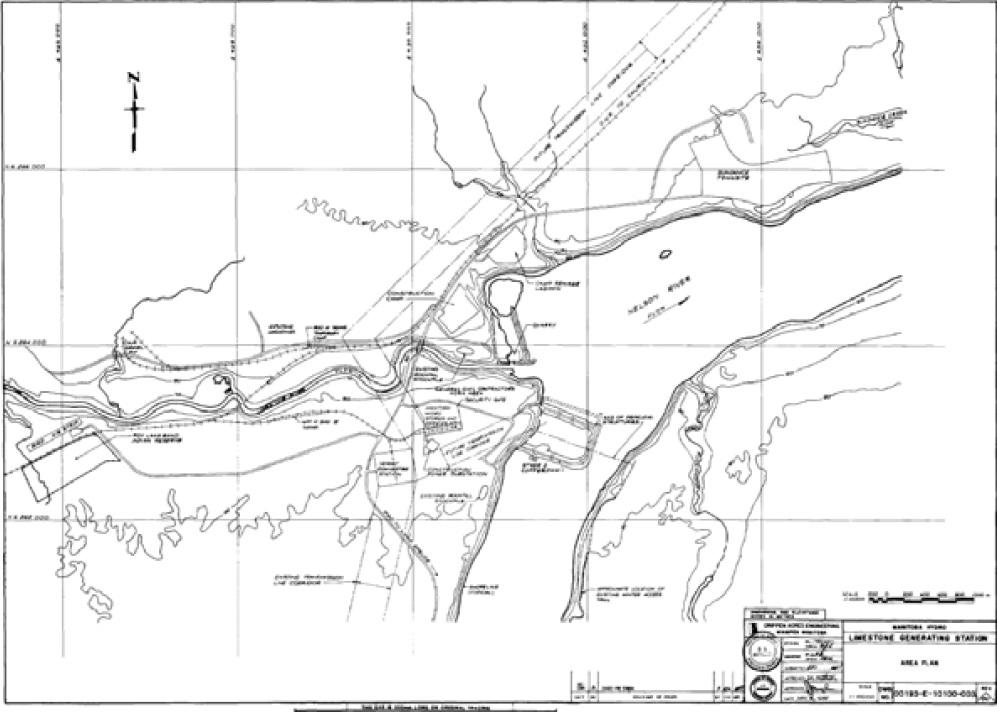 The generating station was constructed in two primary stages, the first being the construction of the north dam, the powerhouse, and the spillway all contained within the Stage I cofferdam (Photo 4). The second stage began with the full closure of the river, the diversion of water through the spillway, and the completion of the south dam across the river (Photo 5). Following five years of construction activity the first unit went into service in 1990, with the station becoming fully operational by 1992 when the tenth and final unit went into service. 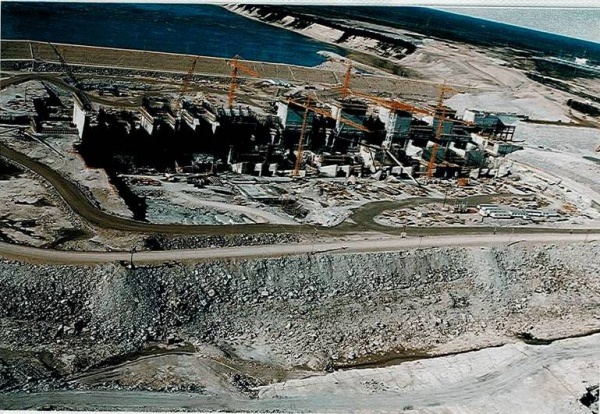 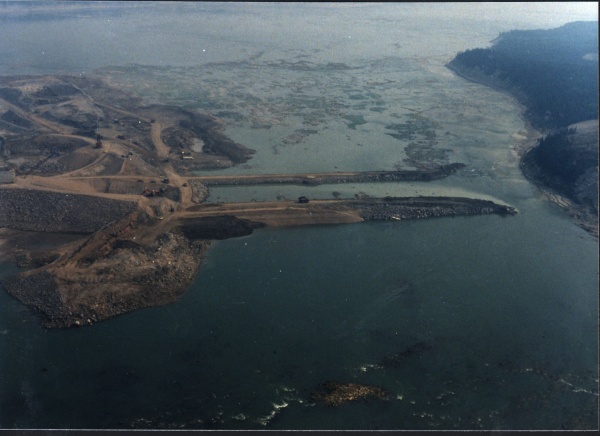 The generating station spans a total of 0.8 mi (1.3 km ) across the Nelson River and consists of a closecoupled intake/powerhouse with ten generating units, concrete wing walls, two main earthfill dams (north and south) and a seven-bay gated spillway (Photos 6, 7; Map 1). 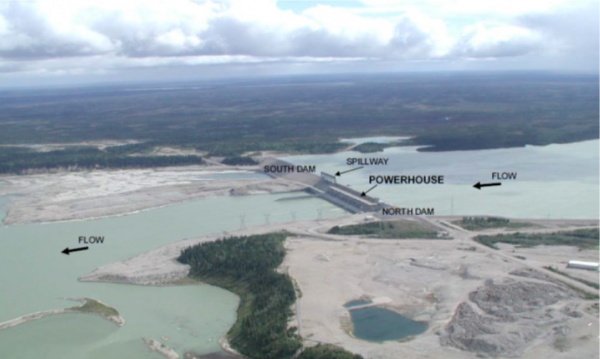 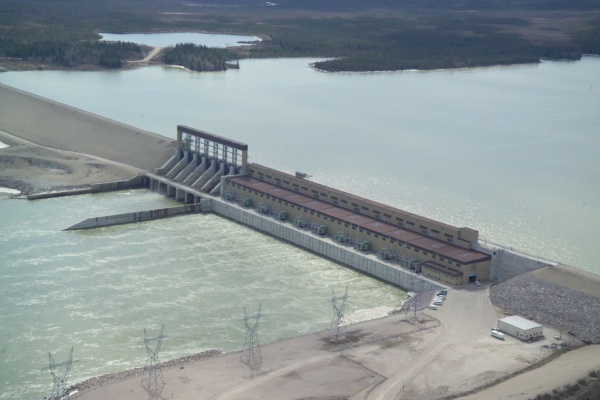 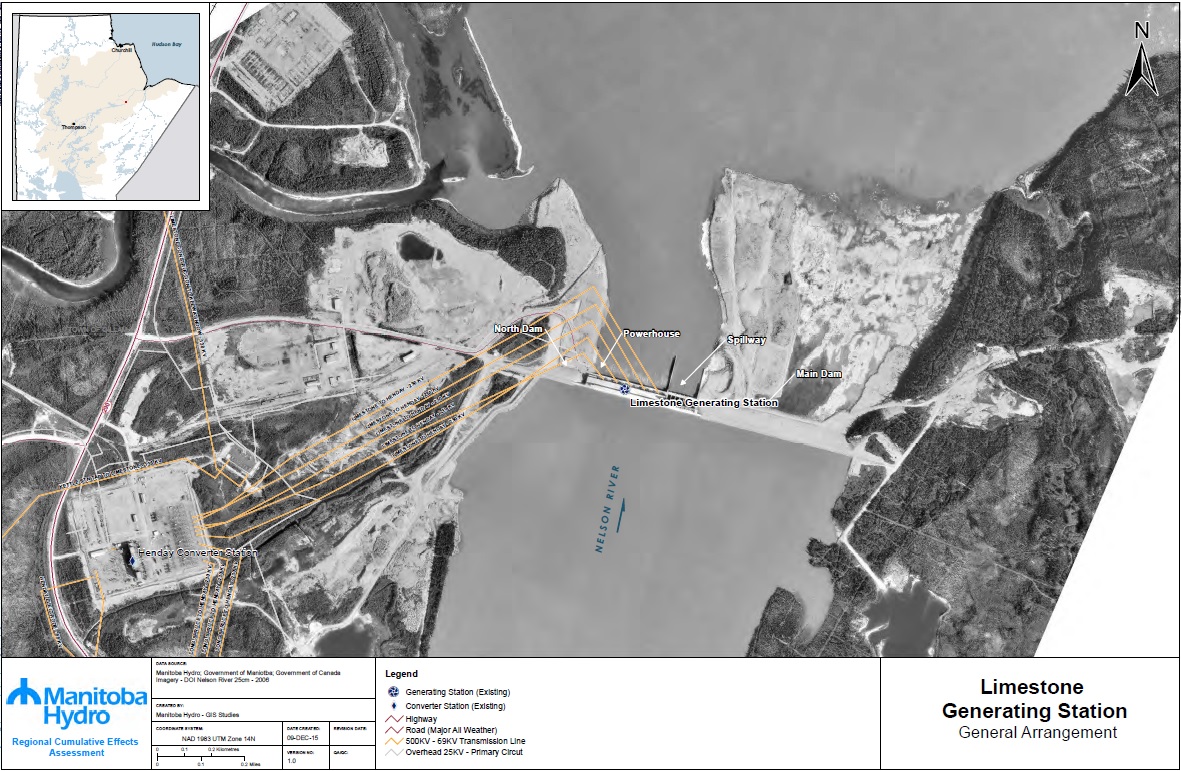 In conjunction with the construction of the Limestone GS two transmission projects were undertaken, and are described below.

A 25 mi (40 km) 138 kV transmission line was built in 1989 from the Radisson Converter Station to the Limestone GS to act as an emergency backup to the generating station.

As part of the re-initiation of construction activities for the Limestone GS, the project underwent the first environmental assessment for a Nelson River generating station. The environmental assessment included consultation with the Town of Gillam and the FLCN. Most of the recommendations for monitoring potential adverse effects on the biophysical environment and enhancing beneficial effects to the local area were implemented during project construction and operation. Only minimal mitigation was recommended because the environmental effects of the project were assessed to be minimal, largely because the Limestone GS resulted in a relatively small amount of flooding. Select borrow areas underwent pilot revegetation initiatives.

The Limestone/Bird waste disposal ground was in use until approximately 1999. The site was cleaned up to meet regulatory requirements in 2000 and Manitoba Hydro planned to transfer the site to the FLCN, however, the transfer has not been finalized.

Access: Access to the site is by PR 290, which was designated as a provincial road following construction. The rail spur line, stores work area, and various buildings remaining from construction continue to be used for operational purposes.

Workforce: The station has approximately 30 to 35 staff comprised of the following: operating staff, maintenance staff (electrical, mechanical, utility), support staff (administration, stores) and supervisory staff. The operators are located on site for 24 hours per day, seven days per week. The remaining of the maintenance staff are on site during normal business hours during the weekdays. The majority of the staff working at the Limestone GS drive in from the Town of Gillam. There are no staff accommodations on site at the Limestone GS. Additional support and technical services are located in the nearby Town of Gillam.

Public Safety: The Limestone GS has a portage around the site and the following public safety features:

Water Regime: The Limestone GS is operated as a run-of-river generating station with flow patterns matching water releases from the Long Spruce GS upstream, which are driven by water releases at the Kettle GS further upstream. The Kettle GS is operated with a daily and weekly cycling pattern that allows Manitoba Hydro to match energy production to consumption patterns. For more details on the Limestone GS, the Long Spruce GS, and the Kettle GS operations and their effects on the water regime, see Water Regime, Sections 4.3.4.3 and 4.3.4.4.